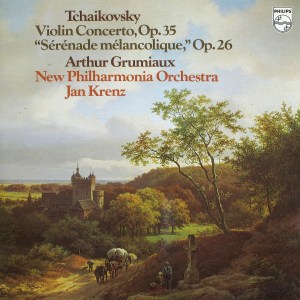 This White Hot Two-Pack of the most well-known and beloved violin concerto in the classical repertoire gives you a TOP performance with TOP quality sound from first note to last. No single copy had two sides as good as these, so we’ve combined two LPs to bring you the best Tchaikovsky Violin Concerto ever to hit the site.

In choosing these two sides we put special emphasis on the sound of the violin. Many copies suffered from a slight screechiness to the sound of the instrument, but we present here a violin that is rich and sweet, yet retains the full pallette of its complex harmonics.

A++, with Tubey Magic to die for. The sound is rich, with a bit of tube smear that does little damage to the overall sound. Big space, a solid bottom, and plenty of dynamic energy are in evidence throughout the side. There’s so much energy that, in comparison to some copies, this side almost sounded like it was running fast!

Side two of this LP earned a grade of A+ — it’s too smeary and dark for our taste.

A+++, with HUGE amounts of space that put to shame every other copy, on either side. The violin is superb, as good as we heard — rich, smooth, clear, resolving. What sets this side apart is the depth, width and three-dimesional quality of the sound. This side may very well be a fluke — no other side sounded like it — but it’s the only way to know for sure just how good the master tape of this recording truly is.

Side one of this copy earned an A+, the violin gets a bit shrill when loud, and knowing this recording as well as we do, that shouldn’t happen.

Click on the Review tab above to see what an insightful critic had to say about Grumiaux’s performance, as well as the lovely Philips sound from 1976.

Grumiaux’s recordings of Bach’s Sonatas & Partitas for Unaccompanied Violin are frequently cited as a supreme reflection of the violinist’s art and as first choices among the many recordings available. One movement from this set, the “Gavotte en rondeaux” from the Partita No. 3, is included on the Voyager Golden Record, attached to the Voyager spacecraft, as a sample of the culture of Earth.

With no fewer than twenty listings including versions by Heifetz with Reiner (RCA), a much underrated set by Kogan with Silvestri, not to mention Oistrakh, Kyung-Wha Chung and others, there would seem little need for any newcomer, even from so distinguished a source as Grumiaux. Philips themselves have put two new versions on to the market relatively recently, Szeryng with Dorati (Universo 6580 009, 12/75) and Fujikawa with de Waart (6500 708, 1 /75).

However, Grumiaux’s admirers will need few promptings to investigate this new issue, for his playing has an aristocratic refinement, purity of tone, poise and an emotional reticence all its own, and these are qualities seen to good advantage in this generous and noble concerto. First, it is perhaps worth pointing out that Grumiaux plays the Concerto without the traditional cuts whereas most artists (Oistrakh, Kyung-Wha Chung and many others) make them. This is an important but I realize not an overriding consideration. Secondly, the Philips engineers accord Grumiaux a recording of exceptional beauty and (I hasten to add) truth, with a wide range, a firmly focused aural image, a well-defined but clean bass and a smooth treble. Separation is impressive, there is a splendid sense of space, and altogether impeccable surfaces.

Grumiaux’s performance is a beautifully paced reading with a particularly fine slow movement, less spectacular in expressive range than Heifetz’s or in its capacity to take one by surprise, less chaste than Kogan’s reading now on Classics for Pleasure (CFP40083, 12/74), less overtly emotional than Oistrakh’s much admired old mono recording with Konwitschny (DG LP18196, 3/55—now deleted), but no less poetic and much better recorded. I spent a pleasant evening comparing details in these and other records 1 had to hand and was much impressed with Mayumi Fujikawa’s reading with the Rotterdam orchestra under Edo de Waart; her slow movement is touching and yet restrained and she inflects the second group in the finale with great character though without drawing attention to herself. Grumiaux has as always superb aplomb and taste throughout, though his first movement cadenza is a little detached and clinical (one suspects it was recorded in the absence of the orchestra though, of course, this may not have been the case). .fan Krenz secures sensitive playing from the New Philharmonia though he is not as subtle or imaginative an accompanist as de Waart. The strings sound quite magnificent in this recording.

Were I playing a version of this concerto for pleasure, Heifetz, Kogan, Milstein (DG 2530 359, 12/73) and Oistrakh would all be on my short-list, and so would Kyung-Wha Chung in her unaffected account with Previn and the LSO. In so oft-recorded a work there can be no clear-cut first choice, but Grumiaux’s account certainly ranks alongside the best, and as a recording it is second to none. Since the Concerto is played complete, the fill-up is less substantial than we have come to expect—the attractive &remade melancolique. R.L.