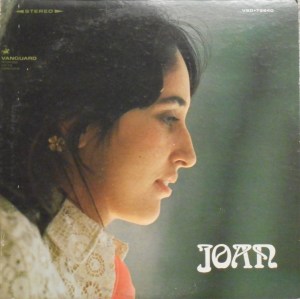 In 1967 Vanguard still knew how to record pure, rich, sweet, Tubey Magical analog. Some of these tracks are amazing sounding. Once a year we run across a clean stereo copy of this album. (With such complex arrangements we don’t feel the mono could do the album justice. You may feel otherwise.)

This pressing appears to be the original stereo label, although with so many Vanguard labels — dozens by my count — this could easily be an early reissue. The paste-on rough cardboard back is a good sign of its age.

Double Plus, with the remarkably innovative reworking of Eleanor Rigby.

White Hot, shootout winning and just plain Hard To Fault (HTF). The second track, a traditional folk song, has Demo Disc quality sound. If you are in the market for a natural sounding female vocal you will have a hard time finding a better one.

Joan was very much an album of its time in terms of its sound and production, more so than any other album that Joan Baez ever recorded. In 1967, rock, folk, folk-rock, and pop all seemed to be headed in new and ever-more-ornate directions, and Joan was a response to that change and, not coincidentally, is also the most self-consciously beautiful record that Baez ever cut.

Arranger/conductor Peter Schickele, who had previously worked with Baez on her Christmas album, provides generally restrained orchestral accompaniment on ten of the 12 songs here. The latter, in sharp contrast to Baez’s earlier work, are mostly drawn from a wide range of such popular composers as John Lennon and Paul McCartney, Donovan, Paul Simon, and Jacques Brel, as well as Tim Hardin and Baez’s late brother-in-law, Richard Farina.

Several of these tracks — “Turquoise” with its gorgeous parts for the harps and the horns, “Children of Darkness” with its beautiful writing for the reeds, and “Saigon Bride” with its haunting brass part — are profoundly beautiful.