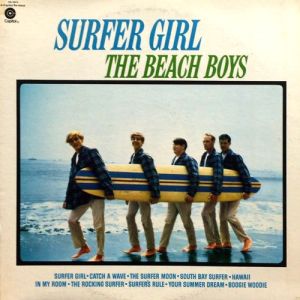 Which means this is a reissue, but it’s one helluva reissue, with richness, Tubey Magic and freedom from distortion that belie the label of the album. There’s nothing dry, transistory, dubby or compressed about the sound here. Just the opposite in fact.

If you think only original pressings — of this or any other record — can sound good, this Hot Stamper should go a long way toward disabusing you of that notion.

And if that is not enough to sway you, how about the amazingly quiet Mint Minus vinyl the record is pressed on? Find me an original with surfaces this quiet and I will eat it.

For the first time producing an album himself, Brian Wilson co-wrote with Mike Love, Gary Usher and Roger Christian some of his most cherished songs.

The title track, a number 7 US hit, was the first song Brian had ever composed, written at the age of 19 using “When You Wish Upon a Star” as his inspiration. As a ballad, it was a risky move for a single, but its obvious quality overcame any potential commercial risks.

Its flip-side, “Little Deuce Coupe”, proved to be The Beach Boys’ most successful B-side, reaching US number 15 and becoming a hot rod staple. It also continued the band’s current trend of putting a surf-related song on the A-side of singles, and car songs on the B-side. [This song is not found on some of the pressings we are selling.]

“Catch a Wave” featured Mike Love’s sister, Maureen, on harp, while “The Surfer Moon” was the first Beach Boys song to have a string arrangement.

“In My Room” was perhaps Brian Wilson’s first personal song, a reflection on having a place to go to feel a sense of security and safety from the stress of one’s life. Despite some slight material (“South Bay Surfer”, “Boogie Woodie”), it was clear that Surfer Girl was a significant step forward for The Beach Boys – and the first of many.

“South Bay Surfer” is co-credited to Al Jardine, who had rejoined The Beach Boys in the summer of 1963 in a limited capacity and does not appear on the album cover.

The instrumental track for “The Surfer Moon” (Brian’s first known use of strings) was recorded (as “The Summer Moon”) in early May for an extra-BB act he was recording, Bob & Vikki; this version was never released, although an acetate exists. Bob was Bob Norberg, Brian’s room mate in 1962.