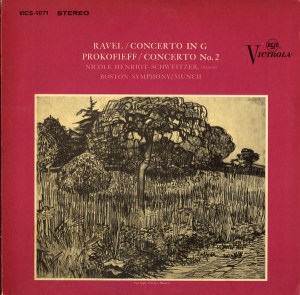 This is a wonderful sounding performance of Ravel’s Piano Concerto, originally available on Shaded Dog (LSC 2271) and overflowing with Tubey Magical Living Stereo sound from 1958. The Victrola here is from 1964, and may or may not sound better than the average original RCA pressing. LSC 2271 is not a record we run into every day, so comparisons would be speculative to say the least.

What we can tell you is that our Victrola here is big, spacious, transparent and clear, with dead-on tonality throughout.

The overall sound seems to lack weight at first but with continued listening it appears to be the result of the orchestration being “lighter”, more appropriate to the jazz influences in the music. If you like Gershwin this piece will be right up your alley.

Side two contains the Prokofieff Second Piano Concerto. The sonics are quite good, A+ to A++, not quite the equal of side one but not far behind either. It’s a bit lighter than side one, otherwise quite similar.

Gershwin was influenced by French composers of the early twentieth century. In turn Maurice Ravel was impressed with Gershwin’s abilities, commenting, “Personally I find jazz most interesting: the rhythms, the way the melodies are handled, the melodies themselves. I have heard of George Gershwin’s works and I find them intriguing.” The orchestrations in Gershwin’s symphonic works often seem similar to those of Ravel; likewise, Ravel’s two piano concertos evince an influence of Gershwin.

Gershwin asked to study with Ravel. When Ravel heard how much Gershwin earned, Ravel replied with words to the effect of, “You should give me lessons.”

Notes from the Piano Society

The Piano Concerto in G major was a long time in the making. Ravel started thinking about it in 1928 (at his visit to Oxford) after his return from America. He took it up again in 1929, but then broke off to write the Concerto for the left hand, then continued with in 1930, and completed it in 1931. Ravel saw this concerto as being in the spirit of Mozart and Saint-Saëns, light and brilliant and in contrast to those heavier classical concerti which he felt were written “against” rather than “for” the piano.

The concerto observes traditional 3-movement form, albeit with great contrasts of style between movements and indeed within them: the first movement begins with a whipcrack and goes on to include jazz elements reminiscent of Gershwin (whom Ravel had met in America in 1928), as well as an imitation of a musical saw in the trilling of the piano. Of the solo part, Marguerite Long later recalled: “It is a difficult work especially in respect of the second movement where one has no respite. I told Ravel one day how anxious I was, after all the fantasy and brilliant orchestration of the first part, to be able to maintain the cantabile of the melody of the piano alone during such a long slow flowing phrase… ‘That flowing phrase!’ Ravel cried. ‘How I worked over it bar by bar! It nearly killed me!'”