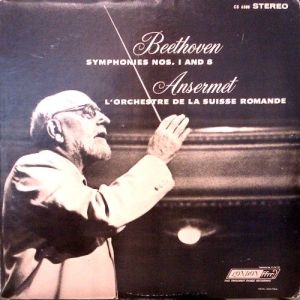 This Super Hot Stamper side one London Whiteback LP (CS 6388) gives you a wonderful sounding Beethoven First Symphony. It’s rich, sweet and Tubey Magical in the tradition of all the best Ansermet recordings from the era.

Unfortunately the second side with the 8th Symphony is awful — hard, shrill and definitely not worth your time.

Good sounding Beethoven symphony recordings are few and far between, and this one is very good indeed.

A++! Rich, sweet, big — this one is giving us the sound we love. It’s not completely transparent, but it’s so relaxed and musical we think you won’t mind. If we had five or ten copies to play maybe one would beat it, but these records just don’t sit in the record bins like they used to five or ten years ago.

Not good, no grade.

The twelve-bar introduction of the first movement is sometimes considered a “musical joke”. For example, the English musicologist Donald Tovey has called this work “a comedy of manners”.[4] In fact, Symphony # 1 may simply be a result of Beethoven’s experimentation: it consists of a sequence of dominant-tonic chord sequences in the wrong key, so that the listener only gradually realizes the real key of the symphony. There is a shortened recapitulation before the coda which closes the first movement. The andante (in F major, the subdominant) of the second movement is played considerably faster than the general concept of that tempo, at what could be thought of as moderato. The third movement is remarkable because, although it is marked Menuetto, it is so fast that it is essentially a scherzo. The finale opens with another possible joke, consisting of partial scales played slowly before the full C-major scale marks the real start of the allegro.