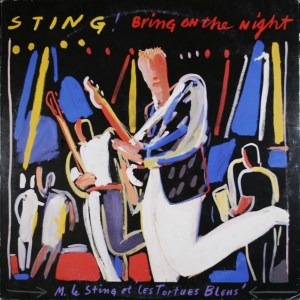 Sting said to Bring On The Night and who were we to argue? We finally collected enough of these import pressings to get a proper shootout going, and the best copies really impressed us.

The best copies like this one give you more transparency and separation between the various bandmembers. Many copies had a sterile/dry quality, but this one remains rich throughout with more analog warmth.

This vintage A&M pressing has the kind of Tubey Magical Midrange that modern records rarely even BEGIN to reproduce. Folks, that sound is gone and it sure isn’t showing signs of coming back. If you love hearing INTO a recording, actually being able to “see” the performers, and feeling as if you are listening to the concert live, this is the record for you. It’s what vintage all analog recordings are known for — this sound.

What the best sides of Bring On The Night have to offer is not hard to hear:

The best sides tended to have the same qualities. They were huge, open, clear, transparent, rich, tubey and natural.

And of course, they rocked, with startling dynamics, massive amounts of bass and a full-bodied midrange. The better the pressing the more the instruments jumped right out of the speakers. Live in your listening room was the sound we were after, and this copy delivers like nothing you have ever heard.

What We’re Listening For on Bring On The Night

Sting really got carried away with the idea that his supporting crew for Dream of the Blue Turtles was a real jazz band, and technically, he was kind of right. He did pluck them straight out of Wynton Marsalis’ backing band (thereby angering Wynton and emboldening his anti-rock stance, while flaring up a sibling rivalry between the trumpeter and his saxophonist brother Branford — a veritable hat trick, that), and since he was initially a jazz bassist, it seemed like a good fit… the loose, rather infectious performances show what Sting was trying to achieve with his debut.