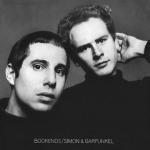 Wikipedia on the Music

The “Bookends Theme” that opens and closes side one is played on the acoustic guitar, with no additional instruments. An audio sample of the band’s first hit, “The Sound of Silence”, softly plays during a cacophony of sounds near the end of the second track, “Save the Life of My Child”. John Simon, who was credited with production assistance on the song, created the bassline by playing a Moog synthesizer with help from Bob Moog himself.

James Bennighof, author of The Words and Music of Paul Simon, finds that “textural elements are variously supported by a churning groove, percussive, and distorted electronic sounds” that compliment the song’s subject matter, suicide suburban youth. “Overs” explores a more jazz-oriented style, with a larger selection or chords and looser form than the group’s previous styles.

“Voices of Old People” is a sound collage, and was recorded on tape by Garfunkel at the United Home for Aged Hebrews and the California Home for the Aged at Reseda. The collection of audio recordings of the elderly find them musing on treasured photographs, illness and living conditions.

In “Old Friends”, the title generally conveys the introduction or ending of sections through repetition, and the song builds upon a “rather loose formal structure” that at first includes an acoustic guitar and soft mood. An additional element is introduced midway through the track: an orchestral arrangement conducted by Jimmie Haskell, dominated by strings and xylophone notes. Horns and other instruments are added when the duo cease singing, creating a turbulence that builds to a single high, sustained note on the strings. The song then segues into the final song of side one, the reprise of the “Bookends Theme”.

Side two consists of miscellaneous unrelated songs unused for The Graduate, with many possessing a more rock-based sound than the unified folk songs that precede it.

In “Fakin’ It”, melodies are occasionally deleted to suit lyrics, but the song generally follows a similar chord structure and melodic outline over a “funky rock beat” that sonically references the Beatles’ “Tomorrow Never Knows”.

“Mrs. Robinson” opens with an “instantly recognizable” pop rock guitar hook that carries throughout the track. The first verse consists only of syllables—”dee-dee-dee” and “doo-doo-doo”—that form stable harmonic foundation. The inclusion of the meaningless syllables arises from the unfinished nature of the song when pitched to director Mike Nichols, who particularly liked the verse.

“A Hazy Shade of Winter” follows a more rock-tinged sound, with a fairly straightforward verse-refrain structure.

“At the Zoo” uses a rock groove that settles into the key of G major.

Bookends is a literary album that contains the most minimal of openings with the theme, an acoustic guitar stating itself slowly and plaintively before erupting into the wash of synthesizers and dissonance that is “Save the Life of My Child.”

The classic “America” is next, a folk song with a lilting soprano saxophone in the refrain and a small pipe organ painting the acoustic guitars in the more poignant verses. The song relies on pop structures to carry its message of hope and disillusionment as two people travel the American landscape searching for it until it dawns on them that everyone else on the freeway is doing the same thing.

The final four tracks, “Mrs. Robinson,” the theme song for the film The Graduate, “A Hazy Shade of Winter,” and the album’s final track, “At the Zoo,” offer as tremblingly bleak a vision for the future as anything done by the Velvet Underground, but rooted in the lives of everyday people, not in the decadent underground personages of New York’s Factory studio. But the album is also a warning that to pay attention is to take as much control of one’s fate as possible.