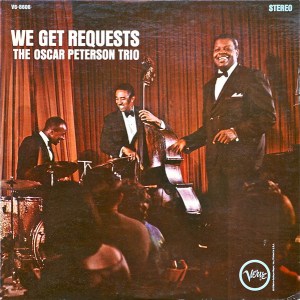 This is the way it must have sounded inside the RCA Studios in New York way back in 1964, not the club shown on the cover. The legendary RCA engineer Bob Simpson was behind the board.

If you have full-range speakers one of the qualities you may recognize in the sound of the piano is WARMTH. The piano is not hard, brittle or tinkly. It’s more like a real piano and less like a recorded one. This is what good “live” recordings tend to do well. There isn’t time to mess with the sound. Often the mix is live, so messing around after the fact is just not an option.

Bad mastering can ruin the sound, and often does, along with worn out stampers and bad vinyl and five gram needles that scrape off the high frequencies. But a few — far too few — copies survive all such hazards. They manage to capture these wonderful musical performances on their molecules of vinyl, showing us a sound we never expected.

Right away you hear a solid, full-bodied piano and snare drum, a sure sign of great sound to come. These sides were simply richer and fuller than the other copies we played. That rich tonality is key to getting the music to work, to allow all the instrumental elements to balance. The natural top doesn’t hurt either.

Great space and immediacy, powerful driving energy — these sides were up there with the best Peterson albums we played.

The sound was jumpin’ out of the speakers. There was not a trace of smear on the piano, which is unusual in our experience, although no one ever seems to talk about smeary pianos in the audiophile world (except for us of course).

Ray Brown’s bass is huge. With an extended top end the space of the studio and harmonics of the instruments are reproduced correctly.

Quiet Nights Of Quiet Stars (Corcovado)
The Days Of Wine & Roses
My One And Only Love
People
Have You Met Miss Jones?

You Look Good To Me
The Girl From Ipanema
D. & E.
Time And Again
Goodbye J.D.

This 1964 studio session features the Peterson trio with bassist Ray Brown and Ed Thigpen, a group that had been together for five years by then and performed like a well-oiled machine.

The repertoire is mostly pop songs of the day, including bossa nova tunes and film themes, and the treatments are fairly brief, with emphasis placed squarely on the melodies.

Even in their lightest moments, though, the group demonstrates some of the qualities that made it among the most influential piano trios in jazz, a group that could generate tremendous rhythmic energy and a sense of developing musical detail. For all his legendary force, Peterson possesses a subtle rhythmic sense, and here he infuses even “People” with an undercurrent of swing. This is undemanding, tuneful music best suited for casual listening, but it still sparkles with the trio’s customary élan.

This is an Older Jazz Review.

Most of the older reviews you see are for records that did not go through the shootout process, the revolutionary approach to finding better sounding pressings we developed in the early 2000s and have since turned into a fine art.

Helpful Advice on Cleaning Your Records

Helpful Advice on Doing Your Own Shootouts

What We’ve Learned from Record Experiments