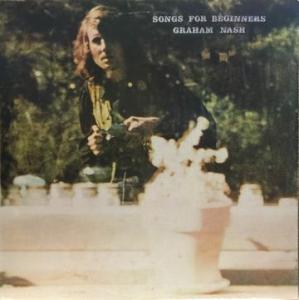 Presenting another entry in our extensive Listening in Depth series with advice on what to listen for as you critically evaluate your copy of Songs for Beginners. Here are some albums currently on our site with similar Track by Track breakdowns.

This is one helluva well recorded album. Most of the credit must go to the team of recording engineers, led here by the esteemed Bill Halverson, the man behind all of the Crosby Stills Nash and Young albums. Nash was clearly influenced by his work with his gifted bandmates, proving with this album that he can hold his own with the best of the best.

Some songs (We Can Change The World, Be Yourself) are grandly scaled productions with the kind of studio polish that would make Supertramp envious. For me, a big speaker guy with a penchant for giving the old volume knob an extra click or two, it just doesn’t get any better.

The recording is of course superb throughout, in the best tradition of Crosby Stills and Nash’s classic early albums: transparent, smooth and sweet vocals, with loads of midrange magic ; deep punchy bass; lovely extension on the top to capture the shimmer of the cymbals and harmonic trails of the acoustic guitars; with the whole balanced superbly by one of our all-time heroes, Glyn Johns.

Side One – Better Days

This easily qualifies as the best test track for side one. It starts out with a soft, intimate vocal from Nash — the more intimate the sound here, the better. The hot stamper copies have an immediacy and a presence that is breathtaking.

Listen also for the sound of the piano. If the piano sounds full and rich, yet clear and not at all smeared, you are off to a very good start. On the best copies you can follow the chords behind the lead instruments throughout the song. The piano easily gets lost on most copies. On the truly transparent pressings you can always hear what the piano player is doing, how his contribution is aiding the material overall, even when its far in the background. That’s what a Hot Stamper gives you: the chance to appreciate every instrument as it works it way through the song.

Ah, but what really separates the men from the boys is the double-tracked vocal (one Nash clearly singing out of each speaker or course!), starting with “Now that you know it’s nowhere… What’s to stop you coming home?” On the killer copies he gets very loud but never for a moment does his voice cross the line into hardess or shrillness. To borrow a phrase from those days, his voice stays natural, even when he’s pushing hard. That’s the emotional peak of the song. The last thing you want is for the sound to be aggressive and call attention to itself.

Most copies will have you wincing by this point if you are at any sort of serious level on this track. Only one original stamper gets his voice right on side one. (No reissue or import or heavy vinyl version I’ve ever heard is even competitive with the best originals, so don’t waste your money.)

The bass clarinet solo (I always thought it was a tenor sax!) almost never sounds right unless you have an especially magical copy. It’s usually hard sounding. Leaner copies tend to make it sound thin. Thick and opaque or just plain rolled off copies make it sound dull.

And last but not least, you need well defined deep bass. There’s plenty of it on this album, stuff well under 30 cycles — it really rumbles the room. There’s an organ playing way down deep underneath this track from early on; a startling effect is created when it suddenly comes to a stop. The more startled you are the better. It’s one of the most powerful audio phenomena I’ve ever experienced, further proof that this album is truly an engineering

Side Two – Chicago / We Can Change the World

The two last songs here are wedded together, the latter being the chorus of the former. Let me tell you folks: this is ANALOG MAGIC AT ITS BEST. You will never hear a CD sound like this if you live to be a hundred. The midrange is so rich and sweet it makes 99% of all the recordings you’ve ever heard pale in comparison.

The more the individual voices can be heard, free of even the slightest trace of grit or grain, the better the copy. The sound is nothing short of GLORIOUS. This song is Demo Disc material. It rivals Anything on Any Super Disc List compiled by Anybody, and that includes me!

The famous female backup singers here are on scores if not hundreds of albums from the era. Some of the very same girls’ voices can clearly be heard on Pretzel Logic and Aja, to name just a couple of albums we’ve played to death around here. See if you can pick them out of the throng.

One last thing: listen for the organ at the beginning of the song. It should be really punchy with tons of solid low end; it drives the beat like crazy. It’s so funky I’m surprised nobody’s sampled it yet. Maybe they have. How the hell would I know? I don’t listen to that shizzle.

In fact, the sound of this album is so good in so many ways, it prompted me to ask the question: Are any of the other albums by Nash’s bandmates as well recorded? Albums by CSN and/or Y, not a chance. They’re well-recorded, don’t get me wrong, but this one is in another league altogether.

Surveying the complete output of all the members would be time consuming, so I’ll cut to the chase. The short answer is three: David Crosby’s If Only I Could Remember My Name, the clear winner of this comparison, followed by two of Neil Young’s: After the Gold Rush and Zuma. Each of them has its own “sound” which is detailed on the site in their respective Hot Stamper listings.