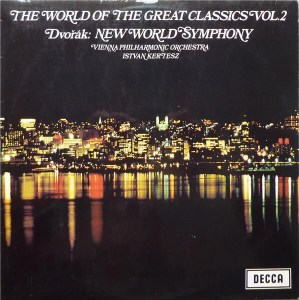 Dvorák draws the musical threads together in the last movement, weaving new material with moods and themes from previous movements into a grand finale that resulted in extended cheering from the New York audience at its December 1893 premiere.

The New York critic W. J. Henderson raved: “It is a great symphony and must take its place among the finest works in the form produced since the death of Beethoven.”

This combination of old and new works wonders on this title as you will surely hear for yourself on either of these Super Hot sides. And the 1970 British vinyl plays mostly Mint Minus!

A++ to A+++, just shy of the sound of White Hot shootout winning side. The hall is huge, so wide and deep, spacious and open. The perspective is above all natural. A little more extension up top and this side would have been impossible to beat.

Solid, powerful tympani whacks — listen for them. Sweet woodwinds too.

A++, big and lively, with good weight down low for the lower strings and percussion. The sound is slightly blurry and veiled, but about an inch in or so the highs come in stronger, the sound opens up and there is less smear. A little more weight in the climactic fourth movement would have put this side over the top.

Big brass, plain and simple. When the brass is powerful and weighty, the music has the drive and energy to move the listener. As a rule the tympani too will sound right when the brass has the air-moving power it should, as will the lower strings.

Without fullness, richness and clarity in the area below the midrange, neither the sound nor the music can succeed. Many of the pressings we auditioned early on in an elimination round could not reproduce the brass with much weight; consequently they did not make it to the shootout. (Sibelius’ Finlandia is the same way; it needs real weight down low. The huge brass opening of the piece is breathtaking on the best copies.)

The one that seemed to us to be the best balance of sound and performance was conducted by Istvan Kertesz, but not with the LSO. His recording with the Vienna Philharmonic in 1961, his debut for Decca as a matter of fact, is the one that ended up winning our shootout of a dozen pressings or so.

Dvorák joined the ranks of Bohemian immigrants on New York’s east side in September 1892. But whereas his compatriots were mostly working class, the conductor / composer arrived to a princely $15,000 contract as director of the newly-founded National Conservatory of Music.

A victim of ethnic prejudice himself from the Germanic-centered Viennese, it’s no wonder that his ear was not limited to the music within conservatory walls but delighted in the full range of sounds from America’s diverse communities. “Many of my impressions [of America] are those of a foreigner who has not been here long enough to overcome the feeling of strangeness and bewildered astonishment which must fill all European visitors upon their first arrival,” he wrote in Harper’s Monthly.

We know that Dvorák’s assistant Harry Burleigh introduced him to African-American music and that Dvorák opined publicly that these could be the basis of a true American style: “In the Negro melodies of America I discover all that is needed for a great and noble school of music.” The African-American emphasis often overshadows another source of inspiration: Henry Wadsworth Longfellow’s poem Hiawatha — a connection that music historian Michael Beckerman reveals goes beyond a generalized “native” influence to explicit connections.

Dvorák wrote to his American patron Jeannette Thurber about his admiration of the poem, and described the second movement in an interview on the day the New World Symphony premiered: “It is in reality a study or a sketch for a longer work, whether a cantata or an opera which I purpose [sic] writing, and which will be based upon Longfellow’s Hiawatha.” Dvorák’s 1893 comments that “America can have great and noble music of her own, growing out of the very soil and partaking of its nature — the natural voice of a free and vigorous race” assume a broader meaning with the native American connection in mind.

The listener knows from the slowly unfolding harmonies that begin the Symphony that the work is one of great dimension, both in scale and emotional impact — a first impression reinforced by the sudden interruption of angular motive and thunderclap timpani that lead into the Allegro proper. The main theme is characterized by a dotted (long short) rhythm, a device Dvorák employs throughout the four movements. Its consistent use infuses even the slower movements with a folk-dance quality, and allows him to marshal his orchestral forces in large blocks without the sounds becoming muddy.

After an opening chorale, the English horn gives out the main theme of the second movement, a wordless song reminiscent of an African-American spiritual and later adapted by William Arms Fisher for the hymn “Goin’ Home.” The Hiawatha connection is that of the journey home and death of Minnehaha; in either event, both melody and timbre transcend local color toward a more universal human emotion.

As Beckerman notes, even while painting a broad American canvas “Dvorák also discovered a sadness in the stillness of the prairie.” Another writer, Willa Cather, described it as “the amazement of a new soul in a new world; a soul new and yet old, that had dreamed something despairing, something glorious, in the dark before it was born.” The middle section moves from an individual voice to a collective one, as the phrases alternate in call-and-response and evoke physical gesture of waving back and forth.

The third movement begins with a nod to the scherzo in Beethoven’s Ninth Symphony. But Dvorák connects the European past to the American present with a rhythmic dance underlaid by powerful timpani strokes.

Dvorák draws the musical threads together in the last movement, weaving new material with moods and themes from previous movements into a grand finale that resulted in extended cheering from the New York audience at its December 1893 premiere. The New York critic W. J. Henderson raved: “It is a great symphony and must take its place among the finest works in the form produced since the death of Beethoven.”

In Boston, however, the more parochial culture shines through the words of William Apthorp: “The great bane of the present Slavic and Scandinavian Schools is and has been the attempt to make civilized music by civilized methods out of essentially barbaric material… …Our American Negro music has every element of barbarism to be found in the Slavic or Scandinavian folk-songs; it is essentially barbarous music.” Apthorp’s words remind us that even the “new world” of Gilded Age America could not escape the narrow provincialism Szymanowski lamented in Old World Europe.

Having already recorded for EMI/Columbia records, Kertész now signed an exclusive contract with Decca/London for whom he began to make dozens of prize-winning recordings. Already at this early stage in his career, Kertész’s interpretations of Brahms and Dvorák were highly regarded for their transparent textures and unmannered phrasing. In stark contrast to Herbert von Karajan and Georg Szell Kertész’s music making featured an unforced manner even when employing the fastest of tempi.

Other elements that made a Kertész performance notable was the elasticity of tempi while adhering to the structural coherence of a given musical work. His British debut was with the Royal Liverpool Philharmonic Orchestra in 1960. Kertész made his U.S. debut during the 1961-62 season, also beginning an association with the Israel Philharmonic Orchestra with whom he guest conducted at Tel Aviv’s Mann Auditorium in March 1962. Eventually, Kertész conducted over 378 compositions with the Israel Philharmonic over an eleven-year period.

Within just four years, István Kertész had established a lasting international reputation as a conductor.