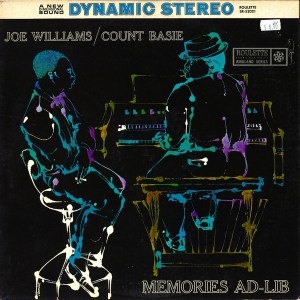 Having done this for so long, we understand and appreciate that rich, full, solid, Tubey Magical sound is key to the presentation of this primarily vocal music. We rate these qualities higher than others we might be listening for (e.g., bass definition, soundstage, depth, etc.). The music is not so much about the details in the recording, but rather in trying to recreate a solid, palpable, real Joe Williams singing live in your listening room. The best copies have an uncanny way of doing just that.

What the best sides of this Classic Jazz Vocal Album have to offer is clear for all to hear:

Ain’t Misbehavin’
I’ll Always Be In Love With You
Sweet Sue, Just You
If I Could Be With You
Dinah
Sometimes I’m Happy

This unusual session appeared on LP in 1958, featuring Count Basie exclusively on organ accompanying Joe Williams’ vocals over a dozen numbers, mostly standards. Although Basie’s recordings on the instrument were sporadic, his style was not at all different from the one he utilized at the piano, filling in the holes and providing just enough backing for his very fine singer. Williams’ vocals seem effortless throughout the date, though excessive reverb is frequently added.

The unidentified rhythm section is anchored by longtime Basie guitarist Freddie Green, bassist Eddie Jones, and drummer Sonny Payne (who sticks mostly to brushes); what’s rather unusual about the date is that Green actually takes several brief solos on his unamplified instrument! A muted trumpet also appears on the lush “If I Could Be with You,” with the frequently omitted verse added. Other highlights include the easygoing swinger “The One I Love (Belongs to Somebody Else)” and a foot-tapping “Honeysuckle Rose.”