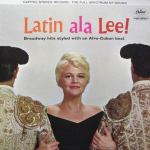 More of the Music of Miss Peggy Lee

Not sure if we would still agree with what we wrote back in 2003 when this record came out, probably not, but here it is anyway.

As for the difficult remix, the more remixes I hear, the less I like remixes. The ones Hoffmann did for Nat King Cole drive me up a wall.

I know how crazy that sounds, but it’s true! If you don’t have a smile on your face fifteen seconds after playing track one, you better check your pulse, cuz, as the famous song has it: Jack, You Dead. Amazingly good sound, courtesy of a fabulous and painstakingly difficult remix by the mastering guru himself, Steve Hoffman. This is popular music for the previous generation — but why should we be denied these long forgotten treasures?

FROM THE LINER NOTES

When Peggy Lee brings her own special warmth to a song, it takes on a fresh, new glow.

Here she adds fire to twelve great songs that are already brilliant as only Broadway hits can be. Such fabled musicals as “My Fair Lady:’ “The Music Man:’ “Can-Can:’ “The Pajama Game:’ “Damn Yankees:’ “Oklahoma!:’ “Say Darling:’ “Bells Are Ringing:’ and “Flower Drum Song” contributed the impressive array of top tunes for this album, and the pulsating Latin backgrounds make them glitter as never before.

Peggy swings smoothly through a fascinating variety of rhythmic contrasts, a choice assortment of thrilling Latin tempos that make this a wonderful album for dancing as well as for listening. Such familiar tunes as C’est Magnifique, Heart, and Surrey with the Fringe on Top are done in the delightful and danceable rhythm of the cha-cha-cha, while on others it’s Peggy Lee at her soft and sultry best, breathing new meaning into tender ballads like the very lovely Til There Was You, done as a haunting bolero.

The genuine Afro-Cuban sound of Jack Marshall’s orchestral backing is no mere accident. The fine Latin instrumentalists who perform on this album were gathered from the vast pool of musical talent in the Los Angeles area, and they succeed in giving these great arrangements an authentic South of the Border flavor.

Trumpets, guitars, and an agile flute section create some really exciting effects, and all tracks feature the solid backing of four Afro-Cuban drummers, allowing Peggy to relax against the staunch rhythm contingent and concentrate her emotional fire on the musical and lyrical challenges present.

The tasteful use of male voices creates still another fine background effect that helps to provide a melodic magic carpet for this trip from Broadway to Latin America. It all adds up to Peggy Lee in a dazzling new setting, as she steps on stage to score still another singing and swinging triumph.