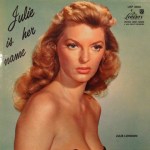 More of the Music of Julie London

We awarded this copy’s side one our very special Four Plus A++++ grade, which is strictly limited to pressings (really, individual sides of pressings) that take a given recording to a level we’ve never experienced before and had no idea could even exist. We estimate that about one per cent of the Hot Stamper pressings we come across in our shootouts earn this grade. You can’t get much more rare than that.

Julie is in the room with you – intimate, breathy and Tubey Magical like practically nothing you’ve ever heard

“…one of the purest, most subtle lounge albums of all time (not to mention one of the best vocal jazz albums ever).”

This side had breathy resolution that was hard to believe, along with size and immediacy that no other side of any copy could touch. Phenomenal.

Super Hot. A bit smooth and fat on the first track, but the second track is actually helped by that EQ, which makes this side work wonderfully well. Listen for the differences between the two sides. They should not be subtle in the least.

On side one listen to how rich the bottom end is on Barney Kessel’s guitar. The Tubey Magic on this side is off the charts. Some copies can be dry, but that is clearly not a problem on this one. The naturalness of the presentation puts this album right at the top of best sounding female vocal albums of all time.

Some of the copies we will be putting up may well have marks that play for a short while on a track or two (not this one of course), as finding copies that don’t have one flaw or another is difficult when the record is fully 60 years old, especially considering that the album was also extremely popular in its day. Few have survived in as nice a shape as this one. If some light crackle in the background is not going to cut it for you, it’s unlikely that we will be able to supply you with Hot Stamper sound for a copy of Julie Is Her Name.

And we would never point you to the awful Boxstar 45 RPM pressing cut by Bernie Grundman, supposedly on tube equipment. I regret to say we actually sold some, but in my defense I can honestly say we never had a single nice thing to say about it.

We found the Tubey Magic on his pressing to be non-existent, as non-existent as it is on practically every Classic Record release he cut. If you have his version you are in for quite a treat when you finally get this one home and on your table. There is a world of difference between the sound of the two versions and we would be very surprised if it takes you more than ten seconds to hear it.

This is the kind of record that the mono cartridge owners of the world worship, with good reason: the sound is amazing. But you don’t need a mono cartridge to hear how good, in fact how much better, this copy sounds than the stereo pressing.

The recording is mono, which means that the stereo pressings are actually reprocessed into stereo. Not too surprisingly the sound is terrible.

For a time, Julie London was as famous for her sexy album covers as for her singing. Her debut is her best, a set of fairly basic interpretations of standards in which she is accompanied tastefully by guitarist Barney Kessel and bassist Ray Leatherwood. “Cry Me a River” from this album was her biggest hit, and her breathy versions of such numbers as “I Should Care,” “Say It Isn’t So,” “Easy Street,” and “Gone with the Wind” are quite haunting.

Julie London once said of her vocal style, “It’s only a thimbleful of a voice, and I have to use it close to a microphone. But it is a kind of oversmoked voice, and it automatically sounds intimate.”

Nothing could be more true of her debut album, Julie is Her Name. London, backed only by Barney Kessel on guitar and Ray Leatherwood on bass creates one of the purest, most subtle lounge albums of all times (not to mention one of the best vocal jazz albums ever). Her tormented version of “Cry Me A River” became her biggest hit and became the gold standard for all future versions of the song.

Born to a song-and-dance family, London grew up with music all around her. Although she decided to pursue the acting side of show business, she never lost her love of music. During her marriage to Jack Webb (of Dragnet fame), her love of jazz and going out to nightclubs grew. With a little prodding from her soon-to-be second husband Bobby Troup (who is famous for penning “(Get Your Kicks On) Route 66”), London took that leap from nightclub patron to nightclub performer.

In the liner notes to the Julie Is Her Name, London was referred to as the “the girl with the ‘come hither’ voice.” Add to that a little cheesecake on the front cover and London’s sultry image was complete. Produced by Troup, Julie Is Her Name pushed London into the musical spotlight. Although London kept recording into the late 60’s, nothing matched the beautiful simplicity and warmth of her first album.

Julie London might best be described as the girl with the “come hither” voice. In this, her first album, Julie’s molten mezzo is handsomely set off by Barney Kessel’s guitar and Ray Leatherwood’s bass – a blending of three skills that adds up to an intimate, sleek, and sultry production. A performer who radiates charm and friendliness, Julie is a beautiful, piquant yet unassuming young woman who has flaxen hair, and eyes that are blue. These qualities are vocally evident in her furry singing style.

Her choice of numbers is exactly right – ranging from I LOVE YOU to CRY ME A RIVER, the latter being a lush, lachrymose item written especially for Julie by her childhood friend, Arthur Hamilton. CRY ME A RIVER, when heard by fellow members of the radio and music fraternity, created an instantaneous and enthusiastic reaction. As a result of this uniform response, LIBERTY released “CRY” as a single record, catapulting Julie to fame overnight.

You’ve seen Julie in some fine motion pictures. Some of the more recent ones include “The Great Man,” “Voice In The Mirror,” “Saddle The Wind,” “A Question Of Adultery,” “Wonderful Country,” “The Third Voice,” and “Night Of The Quarter Moon.” Bill Ballance

LIBERTY’S SPECTRA-SONIC-SOUND is a process which incorporates the use of an advance design of the famed Telefunken microphone in conjunction with Altec Lansing power amplifiers and Ampex Recorders. This combination, plus special microphoning and studio acoustics, has been utilized to reproduce a brilliant sound.