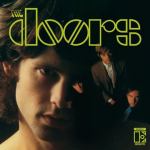 Reviews and Commentaries for The Doors’ Debut

What to listen for you ask? ENERGY and RAW POWER. Few audiophiles have any idea how well recorded this album is, simply because most pressings don’t do a very good job of encoding the life of the master tape onto the vinyl of the day, regardless of whether that day is in 1967 or 2017.

The first Doors album is without a doubt the punchiest, liveliest, most powerful recording in the entire Doors catalog.

Huh? I’m guessing this statement does not comport well with your own experience of the album, and there’s a good reason for that: not many copies of the album provide strong evidence for any of the above qualities. Most pressings are opaque, flat, thin, veiled, compressed, lifeless and sound exactly the way so many old rock records sound: like an old rock record.

The Butterfly and Small Red E labels are so contemptibly thin and harsh they are not worth the vinyl they’re pressed on. You would be much better off with the DCC Gold CD than any of the reissue vinyl we’ve ever heard.

But this album is engineered by Bruce Botnick. The right pressings give you the kind of low-end punch and midrange presence you hear on Love’s first album (when you play the right gold label originals). Botnick engineered them both, and what’s even more amazing is that The Doors first is an even better recording than Love’s!

But the thing that caught us most by surprise is how much LIFE there is in the performances you can hear on the best of these Hot Stamper copies. Morrison pulled out all the stops for his vocals on songs like Backdoor Man and Break On Through; unless you have a very special pressing there is almost no chance you will ever hear him perform with this kind of raw power.

It’s nothing short of amazing to hear that first testosterone-fueled yell at the start of Backdoor Man on side two. It’s also the best sounding cut on the album. We were hard-pressed to think of any other rock album recorded in 1966 (released in ’67) that can compete with it, not for energy and live-in-your-listening-room presence anyway.

The Doors arrived in 1967, the same year as Sgt. Pepper’s Lonely Hearts Club Band; both were psychedelic touchstones and among the first major rock discs that truly stood as albums, rather than collections of songs. But whereas the Beatles took a basically sunny view of humanity, the Doors’ debut offered the dark side of the moon. Their sound was minor-keyed and subterranean, bluesy and spacey, and their subject matter — like that of many of rock’s great albums — was sex, death and getting high. On “End of the Night,” the band invited you to “take a journey to the bright midnight.”

The key to the band’s appeal was the tension between singer Jim Morrison’s Dionysian persona and the band’s crisp, melodic playing. Keyboardist Ray Manzarek and guitarist Robby Krieger’s extended solos on the album version of “Light My Fire” carried one to the brink of euphoria, while the eleven-minute epic “The End” journeyed to a harrowing psychological state. Scattered among these lengthier tracks are such nuggets as “Soul Kitchen” (“learn to forget”) and Morrison’s acid-drenched takes on the blues (“Back Door Man”) and Kurt Weill (“Alabama Song”). Though great albums followed, The Doors stands as the L.A. foursome’s most successful marriage of rock poetics with classically tempered hard rock — a stoned, immaculate classic.