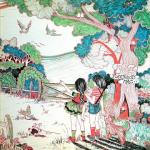 Kiln House is one of the all-time great Fleetwood Mac albums. It’s the first album they recorded after Peter Green left. With Green gone Jeremy Spencer’s influence came to the fore. Apparently he was quite a fan of Buddy Holly. His songs are excellent: straightforward and unerringly melodic.

The co-leader for Kiln House is Danny Kirwan, and he rocks the hell out of this album. Three of the best songs Fleetwood Mac ever did, regardless of incarnation, are here: Tell Me All The Things You Do, Station Man and Jewel Eyed Judy, all written by Kirwan (with the help of others). His guitar work on these three songs is blistering.

The closest thing I can think of to the kind of music the new Mac plays is moody rock of the middle-period Beatles. Kiln House is similar to Beatles ’65 in its dual concerns with vintage rock ‘n’ roll and muted, romantic pieces. Jeremy Spencer took care of the former area, while Danny Kirwan extended the style best represented by McCartney’s “I’ll Follow the Sun.”

Since Spencer left, the band has been forced to re-orient itself somewhat: Kirwan has become the sole focal figure, and this central role has forced him to deal in the visceral as well as the moody areas. But Kirwan had already shown on Kiln House that he was well equipped to handle both. His “Jewel Eyed Judy,” “Tell Me All the Things You Do,” and “Station Man” are among the best examples of the soft-hard rock song, with their lovely, silky vocals and smoking guitars. If Kiln House holds up somewhat better than the gentler Future Games, Kirwan’s dynamic songs are at least as responsible as Spencer’s presence on the former album.