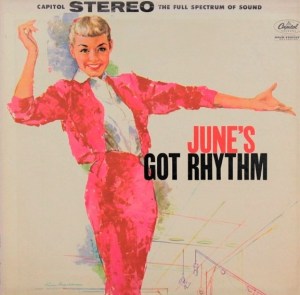 This Super Hot Stamper original stereo Capitol LP from 1958 has SUPERB SOUND on both sides and some of the best June Christy music we’ve ever had the pleasure to play. Just listen to the piano on Gypsy In My Soul; it’s rich, warm and full-bodied. You’ll never hear an RVG recording with a piano that sounds like that. On side two drop the needle on Easy Living to get a taste of some of Capitol’s luscious Tubey Magical midrange.

Musically this album is right up there with the best we know, the creme de la creme of female vocal recordings, albums on the level of Clap Hands and Something Cool and Lady in Satin.

Backed by an intimate combo of star jazzmen, June swings a set of fresh songs in an eventful album that sings out to the whole world that she has, indeed, got rhythm.

For an album of warm, breathy, intimate female vocals, it really doesn’t get much better than this.

We had the best luck with copies that were warm and rich yet clear, and not too dry or harsh when June decides to really belt it out. Practically no copies did not have at least some grit, dryness or harshness on June’s vocals at some point.

The amount of transparency varied dramatically from copy to copy. Transparency is the quality that allows you to hear into a recording; the ambience and subtle musical cues and details that high-resolution analog is famous for are reproduced clearly. (Note that most Heavy Vinyl pressings being made these days seem to be severely Transparency Challenged. Lots of important musical information — the kind we hear on even second-rate regular pressings — is simply missing.)

A++. Transparent and spacious, this was a top copy in our shootout. The first track can be a bit dry and gritty, but by track two the sound fills out, becoming richer and warmer, but some harshness at times remains.

Listen to Shelly Manne’s contribution to the second track. Star Jazzman is right! The man’s a genius.

Track three gets better still, with lovely, intimate guitar accompaniment from none other than Laurindo Almeida.

A++ again, with more extension on both ends of the spectrum, richness and warmth. Track one is not dry here, but later on June can get a bit midrangy and hard when at her loudest.

Many of singer June Christy’s popular Capitol albums feature her cool-toned vocals backed by an orchestra. This recording is an exception. Christy excels on a jazz-oriented set with a nonet that includes trumpeter Ed Leddy, trombonist Frank Rosolino and her husband Bob Cooper (who arranged the set) on tenor and oboe. Christy accurately called this music “intimate swing”.