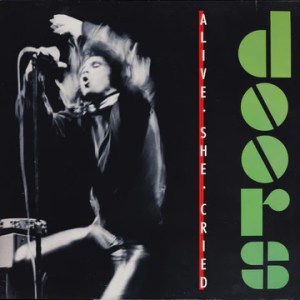 The recordings here come from different concerts, so naturally some songs sound better than others. “Gloria” and “Little Red Rooster” are probably the best sounding songs on here, and that works out well because The Doors are on fire for those two numbers!

Many copies we played lacked bass in a big way, but this one’s got a strong bottom end that lets the music work. The sound is richer and fuller than most of what we heard elsewhere. Many copies were so clean that they sounded like CDs.

This pressing really communicates the energy of a Doors concert, which is exactly what we want from a live album. The clarity, presence, transparency, and energy are all outstanding on this original pressing.

What The Best Sides Of Alive, She Cried Have To Offer Is Not Hard To Hear

What We’re Listening For on Alive, She Cried

And most of the time those very special pressings just plain rock harder. When you hear a copy do what this copy can, it’s an entirely different — and dare I say unforgettable — listening experience.

Gloria
Light My Fire
You Make Me Real

For the first 17 years of their history, the only official live Doors album was Absolutely Live, which had its virtues — especially as it captured elements of their harder, more ambitious repertoire — but also left more casual fans rather cold, owing to the absence of any of their biggest hits. Alive, She Cried helped solve that problem, including as it did a concert version of “Light My Fire” and also adding a legendary concert piece — their rendition of Van Morrison’s mid-’60s Them-era classic “Gloria” — to the Doors’ official Elektra Records discography.