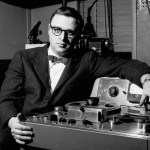 Reviews and Commentaries for the Recordings of Rudy Van Gelder

RVG is one of our favorite recording and mastering engineers. The really good RVG pressings (often on the later labels) sound shockingly close to live music — uncompressed, present, full of energy, with the instruments clearly located on a wide and often deep soundstage, surrounded by the natural space and cool air of his New Jersey studio. As our stereo has improved, and we’ve found better pressings and learned how to clean them better, his “you-are-there” live jazz sound has come to impress us more and more.

We used to put this commentary at the bottom of some of our listings:

Rudy Van Gelder does it again! I hear virtually none of his bad EQ, compressor overload and general unpleasantness. Instead, this recording has smooth, sweet mids; open, unexaggerated highs; and rich, tonally correct bass. In other words, you would never know it was an RVG recording.

With your kind permission we humbly ask that you allow us to take it all back now.

We wrote the following about another of our favorite RVG jazz recordings, All the King’s Horses:

Speaking of Rudy Van Gelder, he comes in for a lot of criticism on a regular basis here at Better Records. We played four copies of this record. Obviously all four of them were recorded by RVG. They also all happen to be mastered by Van Gelder, but only one of them sounded like this [White Hot]. You can’t fault Rudy Van Gelder for the sound of pressings that, for one reason or another, do not have the LIFE and ENERGY of the copy we are listing here. He obviously cut this record properly, and for whatever reason the magic didn’t end up in the grooves most of the time.

All this sounds painfully obvious to us now.

Of course the sound of the master tape does not end up on the record most of the time. It almost never does. If it did we’d be out of business by now. You have to work to find the good RVG pressings. When you do find one, they can be as good as any jazz recording you have ever heard.

To belabor the point a bit further, the early pressings, the ones made with the crude cutting equipment of the day, are often going to be lacking in many important respects. Same with any of the imports, especially the Japanese pressings. The fact that many owners of these records have failed to notice their shortcomings is nothing new, and takes nothing away from the pressings that actually do sound good, such as the ones we offer.

The late ’60s and early ’70s were a good time for Van Gelder. Red Clay is from 1970, All the King’s Men from 1973, and both are amazing Demo Discs in their own right, one for quintet, one for large group. But they are only Demo Discs on the right pressings, another fact that seems to have eluded jazz vinyl aficionados and audiophiles alike.