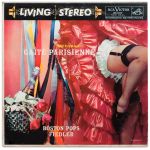 Our Favorite Performance of Gaite Parisienne

The last time I played the Classic I thought it was nothing but a smeary mess, as awful as their awful Scheherazade. If I were to play it today, I’m guessing it would join the other Classic Records entries in our Audiophile Hall of Shame.

Here are some other records we played and found had smeary strings. They did not last long on our turntable.

I love Arthur Fiedler‘s performance with the Boston Pops and the 1954 two track RCA Living Stereo sound, but finding an original Shaded Dog pressing in clean condition under $500 with the right stampers (something above 10 as a rule) is all but impossible nowadays.

If you want to go that way, more power to you.

This 1954 2-track recording is RCA’s first stereo recording of the work. 1954. Can you believe it? A few mics and two channels and it blows away most of the classical recordings ever done! Some old record collectors and tube lovers say classical recording quality ain’t what it used to be. This record proves it.

Can we really be hearing all these things that nobody else seems to be hearing? For example:

Not to mention the fact that we have played a lot of these kinds of records and found them seriously wanting:

We occasionally take the time to create a little “test” to see if audiophiles — customers or just visitors to the blog, makes no difference to us — can hear a specific quality we’d noticed when auditioning a record. Normally this would be a quality that jumped out at us when playing the record, and we were just curious as to whether it jumped out at anybody else.

On this version of Sweet Baby James we heard something that took us by surprise, an artifact we subsequently dubbed an “EQ Anomaly.” We put the question of what this anomaly might be to our readers and waited for someone to spot it. And here is what we got in return.

Crickets. Nada. Zilch. Not even one response.

Does no one own the new Heavy Vinyl reissue? As we said in our review, it’s very good sounding and the vinyl is quiet. I think you could buy one for twenty bucks or less before it went out of print. Seems like someone should have bought one and played it.

If someone did play it, they must not have heard it, because the anomaly could be described in ten words or less in an email to me.

Many of the Heavy Vinyl pressings we play these days — watch for reviews for some heavy hitters coming soon — suffer from the same problem, a shortcoming, by the way, that is almost never heard on authentic vintage vinyl pressings in our experience, our experience being the tens of thousands of them of them that we have auditioned.

I believe I know why most audiophiles in the case of Sweet Baby James can’t hear it: It actually helps fix a problem in their systems. That’s why lots of records these days have it. Audiophiles probably prefer that their records have it. They sure don’t seem to complain about it much.

But if your system is correct from top to bottom, it’s easy to hear. In fact it sticks out like the proverbial sore thumb.