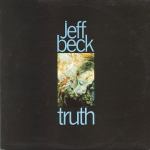 More of the Music of Jeff Beck

An interesting bit of trivia: many side twos earned a sonic grade that was a full plus higher than any given copy’s grade for side one. A half plus higher was quite common too.

Side two most of the time just plain sounds better than side one, so when evaluating your copy be sure to check side two first to hear what is probably going to be the best sound on the album.

Note how spacious, big, full-bodied and DYNAMIC both sides are. That’s why they’re White Hot or close to it. I am pleased to report that the whomp factor on these sides was nothing short of MASSIVE. With tons of bass these sides have what it takes to make the music ROCK.

In many ways it sounds like the first Zep album, and that’s a good thing. The sound is a perfect fit for the music. In recent interviews Jeff Beck has been saying that Jimmy Page stole his idea for a Heavy Rock Band playing electrified blues. Based on the evidence found on the two sides of this very album I would say he has a point.

In 2008 I had the opportunity to hear Ken Scott speak the night before at an AES meeting here in Los Angeles. This is the man who recorded some of the All Time Great Rock Albums, the likes of Ziggy Stardust, The White Album, Honky Chateau, All Things Must Pass, Son Of Schmilsson, America’s debut, and this powerhouse of Heavy Blues Rock.

The Story of Truth

After leaving The Yardbirds in late 1966, Jeff Beck had released three commercial singles, two in 1967 featuring Beck on lead vocals, and one without vocals in 1968. All had been hits on the British singles chart, and all were characterized by songs aimed at the pop chart on the A-side at the behest of producer Mickie Most. Harder rock and blues-based numbers were featured on the b-sides, and for music on the album, Beck opted to pursue the latter course.

Recording sessions for the album took place over four days, the 14th and 15th and the 25th and 26th of May, 1968. Nine tracks were taken from these sessions, including eclectic covers of “Ol’ Man River” by Jerome Kern, the traditional ballad “Greensleeves,” the modern ballad “Morning Dew” by Bonnie Dobson, acknowledgment of two giants of Chicago blues in songs by Willie Dixon, Muddy Waters’ “You Shook Me” and Howlin’ Wolf’s “I Ain’t Superstitious,” the album starting off with a song from Beck’s old band, “Shapes of Things.”

Three originals were credited to “Jeffrey Rod,” a pseudonym for Beck and Stewart, all reworkings of previous blues songs: “Let Me Love You” the song of the same title by Buddy Guy; “Rock My Plimsoul” from “Rock Me Baby” by B.B. King; and “Blues Deluxe” similar to another song by B.B. King, “Gambler’s Blues.” “Plimsoul” had already been recorded for the b-side to the 1967 single “Tallyman,” and the tenth track, an instrumental featuring Jimmy Page, John Paul Jones, Keith Moon, and future Beck group pianist Nicky Hopkins, “Beck’s Bolero,” had been edited and remixed for stereo from the earlier b-side to “Hi Ho Silver Lining.” Due to contractual conflicts, Moon had been credited on the original album as “You Know Who.”

Truth is regarded as a seminal work of heavy metal due to its use of blues toward a hard rock approach. This was confirmed in 2010 by Rhapsody, which called the album one of the all-time best “proto-metal” records. Tom Scholz of Boston has listed it as his favorite album on Gibson’s online magazine, stating, “I knew Jeff Beck’s Truth album inside out…”