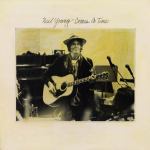 So many copies we played just sounded flat, with dull guitars and hard vocals. Some made Neil sound like he was singing from the back of the studio. Still others noticeably lacked leading edge transients of any kind, blunting the attack of the various stringed instruments.

Believe me, a Neil Young record with dull guitars is not worth playing, owning or writing about. You won’t find one on our site.

This superb Demo Disc has been overlooked by the audiophile press for thirty years, just another example, if we needed one, of how out of touch audiophile reviewers are and always have been. The best sounding Neil Young records — just look in our Hot Stamper listings to find them — have Demo Disc sound to beat the band. I defy anyone to play me a better sounding record than Zuma or Gold Rush. Analog doesn’t get any more magical. And the best copies of Comes a Time are right up there with the best recordings in Neil’s catalog. That’s saying a lot.

On the best copies all the Demo Disc qualities are here: breathy vocals with solid body; huge amounts of ambience; super-transparency; dynamics; note-like punchy bass — the list goes on and on.

We got into this shootout the way we’ve gotten into so many over the years. A few months back I just happened to pick up a clean copy of Comes a Time for cheap at a used record store and figured I’d drop the needle on it and see what happened. What happened was that sweetly tubey magical sounds started emanating from the speakers, better sounds than I had ever associated with these songs. That set us off on a buying frenzy, picking up copies wherever we could find them, preparation for the big shootout that was sure to come.

If side two’s music were a tad better, this album would deserve five stars. We also wholeheartedly agree that this is the True Successor to Harvest, and would add that it’s the only Neil Young album to merit that distinction. To be blunt about it, Harvest Moon is no Comes a Time. Not even close.

Reviews and Commentaries for the Music of Neil Young