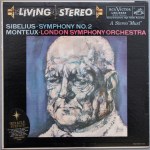 Reviews and Commentaries for the Music of Jean Sibelius

Back in 2013 we liked the performance and the sound of this recording on Living Stereo, but recently when we played a copy or two it did not impress us much.

Our system was very different in 2013, and, of course, the copies of the record we have now are not the same as the ones we played all those years ago.

We currently prefer the performance by Barbarolli on Readers Digest.

The Mackerras reissued on London or RCA Victrola may be good too. We have not played either of them in quite a while, so take this recommendation for what it is, an old memory that may be faulty.

With a Super Hot side two and a nearly as good side one, this 1959 Shaded Dog won our recent shootout for the work. We started by pulling out every performance on every label we had in our backroom and playing them one after another. Most never made it to the half-minute mark. If you have too many classical records taking up too much space and need to winnow them down to a manageable size, pick a composer and play a dozen or two of his works.

Most classical records display an irredeemable mediocrity right from the start; it doesn’t take a pair of golden ears to hear it. If you’re after the best sound, it’s the rare record that will have it, which makes clearing shelf space a lot easier than you might think.

Every now and then in the history of music there appears a work which, without straining the existing idiom, manages to infuse new life into one of the standard musical forms. Such a work is the Second Symphony of Sibelius. The First Symphony which appeared in 1899, was acclaimed as a worthy addition to the long line of European “nationalist” works; in terms of music, Sibelius had done for Finland what Dvorak had done for Czechoslovakia and Borodin for Russia…

The Second Symphony has retained an extraordinary popularity for its individualistic tonal language, dark wind coloring, muted string writing, simple folk-like themes, and distinctly “national” flavor that are all Sibelian to the core.

A++, Super Hot and as good as any side we played. It’s transparent, BIG, and lush for the most part. The strings are especially rich and textured in the best Living Stereo / Decca tradition. As is often the case, the sound can be slightly congested at its loudest, so A++ is our grade.

A+ to A++, much like side two, big and rich, with Tubey Magical lower strings that are the hallmark of the best Golden Age recordings. Nice top end extension as well. The sound is a bit crude — this is 1959 after all — but the dramatic, energetic music of Sibelius works well with this sound.

The genesis of the Second Symphony can be traced to Sibelius’ trip to Italy in early 1901. The trip came about at the suggestion of his friend, the amateur musician Axel Carpelan, and it was there that he began contemplating several ambitious projects, including a four-movement tone poem based on the Don Juan story and a setting of Dante’s Divina Commedia. While none of these plans ever came to fruition, some of the ideas sketched during this trip did find their way into the second movement of this symphony. Carpelan was also instrumental in raising money to allow Sibelius to relinquish his work at the Helsinki Conservatoire and devote himself to the composition of the Second Symphony. Despite his friend’s help, Sibelius’ return to Finland for the summer and autumn was not accompanied by any great burst of inspiration, and extensive revisions delayed the first performance, first to January 1902 and then to March 1903. But from then on, the symphony enjoyed unparalleled success in Finland and eventually led to the major breakthrough in Germany that was so craved by Scandinavian composers of this era (one which Nielsen, for instance, never achieved). The Second Symphony has retained an extraordinary popularity for its individualistic tonal language, dark wind coloring, muted string writing, simple folk-like themes, and distinctly “national” flavor that are all Sibelian to the core.

While the opening mood is pastoral, it leads to an air of instability, in which small, short gestures seem to arise at random and then trail off. Yet there is a subtle coherence to the work that counters its seemingly shapeless quality. All of the material of the first movement emerges from either the two repeated-note subjects heard in the strings and winds at the opening, or from a brooding idea first presented in the winds and brass.

Unlike the first movement, in which the gentleness of the introduction is recaptured at the conclusion, the second movement is full of turbulence and ends without consolation. Two competing subjects seem to engage in a battle: First, a dirge-like bassoon melody in D minor, marked “lugubrious,” builds to a towering culmination in winds and brass; then an ethereal, ruminative theme is played by divided strings in the key of F sharp major. The energetic scherzo, with its machine-gun figures in the strings, is built from a fragment of greatest simplicity: a repeated B flat followed by a turn around that note.

Following the precedent of Beethoven’s Fifth Symphony, the Scherzo is linked directly to the finale through a grand rhetorical bridge passage. The symphony at last achieves a flowing D major melodic line that heroically shakes off the D minor preparation, in the best sense of the Romantic tradition. Also like Beethoven, Sibelius brings back the transitional material a second time so that the victory of the major key can be savored anew, after which he concludes the work with a hymn-like peroration. That said, the Second Symphony marks the end of Sibelius’ early Romantic period that paid homage to his predecessors. In subsequent works, his interest rested more in pursing new formal methods based on fragmentation and recombination.

Finland’s Jean Sibelius is perhaps the most important composer associated with nationalism in music and one of the most influential in the development of the symphony and symphonic poem. Sibelius was born in southern Finland, the second of three children. His physician father left the family bankrupt, owing to his financial extravagance, a trait that, along with heavy drinking, he would pass on to Jean. Jean showed talent on the violin and at age nine composed his first work for it, Rain Drops. In 1885 Sibelius entered the University of Helsinki to study law, but after only a year found himself drawn back to music. He took up composition studies with Martin Wegelius and violin with Mitrofan Wasiliev, then Hermann Csillag. During this time he also became a close friend of Busoni. Though Sibelius auditioned for the Vienna Philharmonic Orchestra, he would come to realize he was not suited to a career as a violinist.

In 1889 Sibelius traveled to Berlin to study counterpoint with Albert Becker, where he also was exposed to new music, particularly that of Richard Strauss. In Vienna he studied with Karl Goldmark and then Robert Fuchs, the latter said to be his most effective teacher. Now Sibelius began pondering the composition of the Kullervo Symphony, based on the Kalevala legends. Sibelius returned to Finland, taught music, and in June 1892, married Aino Järnefelt, daughter of General Alexander Järnefelt, head of one of the most influential families in Finland. The premiere of Kullervo in April 1893 created a veritable sensation, Sibelius thereafter being looked upon as the foremost Finnish composer. The Lemminkäinen suite, begun in 1895 and premiered on April 13, 1896, has come to be regarded as the most important music by Sibelius up to that time.

In 1897 the Finnish Senate voted to pay Sibelius a short-term pension, which some years later became a lifetime conferral. The honor was in lieu of his loss of an important professorship in composition at the music school, the position going to Robert Kajanus. The year 1899 saw the premiere of Sibelius’ First Symphony, which was a tremendous success, to be sure, but not quite of the magnitude of that of Finlandia (1899; rev. 1900).

In the next decade Sibelius would become an international figure in the concert world. Kajanus introduced several of the composer’s works abroad; Sibelius himself was invited to Heidelberg and Berlin to conduct his music. In March 1901, the Second Symphony was received as a statement of independence for Finland, although Sibelius always discouraged attaching programmatic ideas to his music. His only concerto, for violin, came in 1903. The next year Sibelius built a villa outside of Helsinki, named “Ainola” after his wife, where he would live for his remaining 53 years. After a 1908 operation to remove a throat tumor, Sibelius was implored to abstain from alcohol and tobacco, a sanction he followed until 1915. It is generally believed that the darkening of mood in his music during these years owes something to the health crisis.

Sibelius made frequent trips to England, having visited first in 1905 at the urging of Granville Bantock. In 1914 he traveled to Norfolk, CT, where he conducted his newest work The Oceanides. Sibelius spent the war years in Finland working on his Fifth Symphony. Sibelius traveled to England for the last time in 1921. Three years later he completed his Seventh Symphony, and his last work was the incidental music for The Tempest (1925). For his last 30 years Sibelius lived a mostly quiet life, working only on revisions and being generally regarded as the greatest living composer of symphonies. In 1955 his 90th birthday was widely celebrated throughout the world with many performances of his music. Sibelius died of a cerebral hemorrhage in 1957.