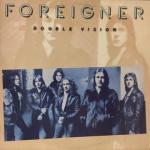 More of the Music of Foreigner

We haven’t played the latter in years. As I recall it was as lifeless and sucked-out in the midrange as most of the other MoFis of that period, notably The Doors (#051) and Trick of the Tail (#062).

What’s key to the sound of Foreigner’s records?

Obviously, the big one would have to be ENERGY, a subject we have discussed at length here on the site.

Next would be punchy BASS, followed by clear, PRESENT vocals.

Those would be the big three.

But those are qualities that are almost never found on Half-Speed Mastered Records!

The remastering of those records usually leaves them lifeless and compressed, with sloppy bass and recessed vocals.

For some reason, audiophiles — including the audiophiles who produce them — like that sound.

The sound of the best pressings were jumping out of our speakers. Have you ever heard a Half-Speed do that?

Almost never, and we’ve played them by the hundreds.