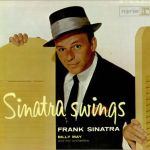 Billy May deserves much of the credit for the “swing” that’s all over the album. His band is jumpin’, and on the best pressings — such as this one — the sound conveys the energy with virtually none of the grit and hardness you hear on so many of Sinatra’s other albums (Sinatra at the Sands comes immediately to mind, but there are far too many others).

This is 1961, and tubes and ribbon mics are in charge of the live-in-the-studio proceedings. With a vintage original pressing such as this one, you hear the kind of sound they heard.

And if you play the record at ear-splitting levels you will hear even more of that sound. Can you imagine how loud this band was playing?

We were especially impressed with the large dynamic swings of the arrangements. And the fact that the best pressings never get aggressive even during their most dynamic passages.

Recorded with Billy May, Sinatra Swings was Frank Sinatra’s first straight swing album for Reprise Records. In terms of content and approach, the record is remarkably similar to his final Capitol swing effort, Come Swing with Me. In fact, Capitol thought the album, originally titled Swing Along with Me, was so close in its sound and title that they sued Sinatra. The record label won the suit, and the singer had to change the name of his Reprise album to Sinatra Swings.

Of course, that didn’t change the actual content of the record. Even though the tone was similar, there were some differences from Come Swing with Me — the ballads have strings, there are saxophones on the record, and the material is more lighthearted on Sinatra Swings, much like the songs on Come Fly with Me.

The restored sense of humor makes Sinatra Swings preferable to Come Swing with Me, even if it doesn’t have the concentrated precision of the first two Sinatra/May sets.