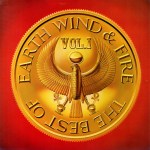 More of the Music of Earth, Wind and Fire

Another in our series of Home Audio Exercises. As is usually the case when plowing through a big pile of copies, we learned pretty quickly that what makes the sound work is having these two qualities in balance:

When the vocals are thin and pinched, as they often are, the resulting edginess and harshness in the midrange take all the fun out of the music. Every track has group vocals and choruses, and the best copies make all the singers sound like they are standing in a big room, shoulder to shoulder, belting it out live and in living color.

The good copies capture that energy and bring it into the mix with the full-bodied sound it no doubt had live in the studio. When the EQ or the vinyl goes awry and their voices (and brass) start to take on a lean or gritty quality, the party’s over.

But richness and fullness are not enough. They must be balanced with TRANSPARENCY.

When you get a good copy it feels like all these guys are live in the studio. You see them clearly. They may have their own mikes, and are certainly being placed artificially in the soundfield to suit the needs of the track (kick drum here, hand-claps over there), but the transparency of the killer pressings makes them sound like they are all in the same big room playing together.

The best pressings sound amazing, with big-as-life Demo Disc Quality sound. Lucky for us EWF was always an audiophile-oriented band. They produced some of the best ’70s multi-track recordings around. With a big speaker system turned up good and loud, the first track is simply mind-boggling. It’s some of the best sound we have heard around here in weeks, and we play a lot of good sounding records!

As you can imagine, most copies of this album leave a lot to be desired. Most were, to one degree or another, dull, smeary, opaque, gritty or shrill.

Our Hot Stampers, on the other hand, depending on hot hot they are, will give you the sound you’re looking for. If you’re a fan of BIG HORNS, with jump-out-of-the-speakers sound, this is the album for you. Some of the best R&B-POP brass ever recorded can be found here — full-bodied, powerful, fast, dynamic and tonally correct.

Here is some specific advice on What to Listen For as you critically evaluate your copy of The Best of Earth Wind & Fire.

When the brass sounded the least bit squawky on a given copy, that was almost always a deal breaker and out it went.

When the BIG, MULTI-TRACKED vocals get going they need to have plenty of space to expand into. They also need to be breathy and warm, with airy extension for the harmonies (and those crazy high notes that only Philip Bailey can sing). Proper tape hiss is a dead giveaway in this respect.

This advice will of course work for any Earth Wind & Fire record you happen to have multiple copies of.

Three distinctive qualities of vintage analog recordings — richness, sweetness and freedom from artificiality — are most clearly heard on a Big Production Recording like this one in the loudest, densest, most climactic choruses of the songs.

We live for that sound here at Better Records. It’s precisely what the best vintage analog pressings do brilliantly. In fact they do it so much better than any other medium that there is really no comparison, and certainly no substitute. If you’re on this site you probably already know that.