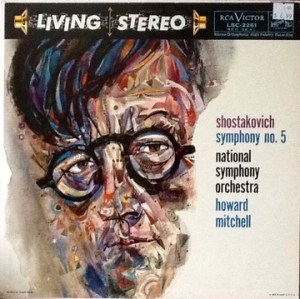 This original Shaded Dog pressing has the kind of Tubey Magical Midrange that modern records can barely BEGIN to reproduce. Folks, that sound is gone and it sure isn’t showing signs of coming back. If you love hearing INTO a recording, actually being able to “see” the performers, and feeling as if you are sitting in the studio with the band, this is the record for you. It’s what vintage all analog recordings are known for —this sound.

What We’re Listening For on Shostakovich’s Fifth Symphony

Wikipedia on Symphony No. 5

The Symphony No. 5 in D minor, Op. 47, by Dmitri Shostakovich is a work for orchestra composed between April and July 1937. Its first performance was on November 21, 1937, in Leningrad by the Leningrad Philharmonic Orchestra under Yevgeny Mravinsky. The premiere was a huge success and received an ovation that lasted well over half an hour.

The symphony is approximately 45 minutes in length and has four movements:

The symphony opens with a strenuous string figure in canon, initially leaping and falling in minor sixths then narrowing to minor thirds. Then, we hear a broadly lyric first theme played by the violins. The second theme is built out of octaves and sevenths. The two themes are expanded in the development section, by having different instruments playing them, and in different styles, including a march section. In the recapitulation, themes heard earlier on are brought back again either identically or somewhat varied. Near the end of the movement, the second subject is heard again in the form of a canon played by flute and horn, then the same material is played by the violin and piccolo. The movement ends with the celesta playing a rising figure, and slowly fading away.

This movement is in ternary form.[2] The movement opens with a heavy, loud introduction in the basses, followed by a softer solo on the E♭ clarinet. There is also a theme played by the woodwinds that is repeated later. In the recapitulation, some of the material heard earlier is repeated piano and staccato, not loudly and sustained as at the start.

Shostakovich begins this movement with violins in three sections, rather than the more usual two. The opening theme is played by the third violins. Second and first violins are slowly added and continue the melody. After the assertive trumpets of the first movement and the raucous horns of the second, this movement uses no brass at all, so there is a limited palette of sounds. This section yields to a pair of flutes in widely-separated counterpoint, the second of which makes reference to the first subject of the first movement. The solo is then passed on to the oboe with string accompaniment. The third movement ends like the first, with a celesta solo that slowly fades away. The strings are divided throughout the entire movement (3 groups of violins, violas in 2, cellos in 2; basses in 2).

This movement, also in ternary form (ABA), differs greatly from its predecessors, mostly with regard to melodic structure and motives. Various themes from earlier in the work are expanded until we get to a new theme played on the trumpet. This new theme is passed on to the strings and eventually the piece becomes quieter. The central section is much quieter and more tranquil, and is ultimately replaced by a march, where the melodies from earlier are played like a funeral dirge, accompanied by timpani. The music builds as the new accompaniment passes from timpani to woodwinds and then to strings, finally reaching a point where the piece changes from a minor key into a major key.