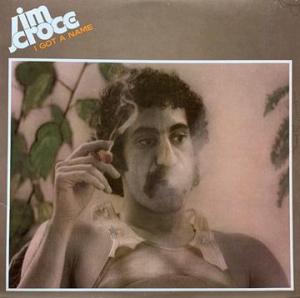 What We’re Listening For on I Got A Name

Jim Croce is one of the most timeless songwriters of arguably the most talented period for songwriters and lyricists: the early ’70s. Croce tragically died in a plane crash the year this album was released, but luckily a man with his talent was able to beat mortality by living on through his thoughtful songs, such as the ones we find in the album I’ve Got a Name. The album brings the listener on a sonic journey through pensive folk ballads to fun-hearted blues jams, each appearing appropriately so that the listener never feels too low or too high, but perfectly balanced throughout.

Croce’s album starts with the title song: I Got a Name. Thoughtful lyrics and intricate fingerpicking make for a timeless tune by Croce. The message of having a strong personal identity is renewed each verse with fresh, easy to comprehend metaphors, making this a pleasant and optimistic listen for folks of all ages.

Croce’s next four songs swing from freewheeling, to melancholic, back to free-wheeling, and finally back to melancholic. The way he’s able to weave the listener into different moods in this section makes the album seem more like an experience, rather than a record. Croce shows in Five Short Minutes that he’s more than a clever songwriter, as his guitar chops in the solo is good ol’ blues guitar at it’s finest. In Age Croce walks the fine line of letting the listener smile while nostalgically hearing sad lyrics. Next Croce shines bright while right in his wheelhouse, with the blues/folk-rock catchy tune Working at the Car Wash Blues. Finally he lays down I’ll Have to Say I Love You in a Song, which off the title alone you know is going to be filled with heartbreak and melancholia. However this pensive song is also a relatable tune to anyone who’s struggled to put their feelings for another into words. This portion of the album shows Croce can appeal to the masses in his lyrics, retain his artistic integrity while pushing the boundaries of his genre, and make some diverse music that’s damn good to listen to.

Next on the album is perhaps his most pure singer-songwriter song of the record: Salon and Saloon. It’s slow, soothing, and calm as a shaded pond in Maine’s wilderness.

Thursday is up next on the record, and again Croce sings a timeless message. Hear he sings about finding love with someone who it seems has slightly different plans. The mix of the catchy verse-pace with fingerpicking likely in a major key, makes for a nice listen.

Top Hat Bar and Grille goes back to the bluesy fun Croce shines at. When listening you can imagine your parents nodding their heads to the tune while drinking cheap beer from a keg at a summer party in the woods (or maybe that’s just my outdoorsy New England parents). The lyrics follow a setting and character path similar to his famous tune Bad, Bad Leroy Brown. Guess if it’s not broke, don’t fix it.

Next up we have Recently, where Croce unorthodoxly implements bongos for an otherwise traditional singer-songwriter tune. The only other songwriter I can think of who tried something similar is Paul Simon, so looks like Croce’s in good company. This tune is another philosophical trip about struggles with life, love, and memories.

Finally we have The Hard Way Every Time, a pleasant sounding song the whole way through. Beautiful tune by Croce, that’s last line ends the album in a perfect, promising way.

This album was packed with lyrical charisma, and it’s definitely a solid record. My only reservation is that it lacks a tune that really sticks with you after you listen, i.e. there’s no banger (though back in his day they probably called it something slightly more wholesome). All and all I’m really happy that Croce’s last album upheld his artistic integrity, and I think it’s a good record. I give it a 4.32/5