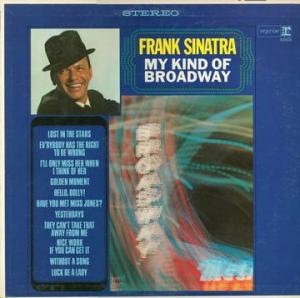 With the Count Basie Orchestra backing him on some tracks (Ev’rybody Has The Right To Be Wrong on side one and Nice Work If You Can Get It and They Can’t Take That Away From Me on side two just to mention a few we especially liked) the swinging Sinatra is heard in his prime and he sounds just great to us.

Without a Song has a killer big band arrangement and a stellar performance from Ol’ Blues Eyes himself.

This vintage Reprise pressing has the kind of Tubey Magical Midrange that modern records rarely begin to reproduce. Folks, that sound is gone and it sure isn’t showing any sign of coming back.

What the best sides of My Kind of Broadway have to offer is not hard to hear:

The knock on this album is that with nine different arrangers and tracks recorded in different years, consistency is not its strong suit.

But is that really fair? Allmusic complained about the performances and arrangements but we certainly wouldn’t call any track here second rate. Most of the album strikes us as Sinatra at his best, so we’re a little dismayed by the critics’ dismissal of the album. We loved it.

Sinatra set very high standards for his repertoire, his musicians, his arrangements and most of all, his performances. I find no evidence to support the contention that any of the above are lackluster or second-rate on My Kind of Broadway.

If you have any doubts, go to youtube, pull up the album and take a listen to some of the tracks. We can’t find a bad one and we would be surprised if you could either. There are lots of great ones in fact.

What We’re Listening For on My Kind of Broadway

Ev’rybody Has The Right To Be Wrong
Golden Moment
Luck Be A Lady
Lost In The Stars
Hello, Dolly!