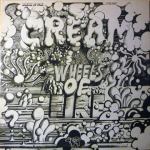 See all of our Eric Clapton and Cream albums in stock

We can sum up the sound of the whomp-less copies in a word: fatiguing. As is always the case, some copies sound better than others, but none could give us the kind of bass that we were hoping for.

And Then There Was Whomp…

We had pretty much given up hope of ever hearing this album sounding better than decent — until a few years ago when we dropped the needle on a copy that sounded like this bad boy. From the moment the needle hit the groove we heard bottom-end information that was completely missing on the other copies we played. There was ACTUAL DEEP BASS — but that wasn’t all.

The drums were punchier, with dramatically more power. The guitar was Tubey Magical beyond belief, yet still clear and crisp. Here was the Wheels Of Fire sound we had been looking for.

Both sides are punchy, powerful, and alive. You really get a sense of how hard Ginger Baker is pounding his kit.

The transparency is astonishing, allowing you to hear much more texture and detail than you’d ever notice on most pressings. It’s open and spacious with real depth to the soundfield — you can really hear into the music on this copy.

The vocals are breathy and full-bodied, and you can really hear the room around the drums. The guitars have a wonderfully meaty texture and lack the edgy quality found on most other copies we played. The sound JUMPS out of the speakers and fills the room — it’s HUGE!

Everything you’d want sonically from a live Cream recording is here and more — big-time presence, tons of life, tonal correctness, and loads of Tubey Magic. The vocals sound wonderful and the bass is PERFECTION. We never knew the live material could sound this good — it’s OUT OF THIS WORLD!