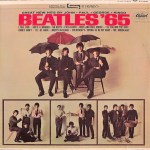 This is a Capitol Records Purple Label LP with THE BEST SOUND I have ever heard for a Capitol Beatles LP (as of 7/5/06).

But there’s a catch. It only sounds good if you reverse your absolute phase. If you don’t, or can’t, forget it.

I wrote the rave review you see below without realizing that I had reversed my headshell leads for the previous record I was playing and had forgotten to change them back. So all the nice things I said about Capitol really aren’t true: they got the phase backwards, which positively ruins the sound unless you can correct for it. I did, and was astonished at how musical the album sounded.

Do you want an AMAZING example of how phase can affect the sound of a recording? Switch back and forth on Honey Don’t, especially if you are the skeptical type like me. You will become a believer on the spot, all doubt forever banished.

I wonder how many other bad Beatle albums are phase reversed? We will report our findings as time goes on so watch for them. [We of course never did this. The Beatles pressings we sell are in correct polarity and we simply do not have the time to survey every Beatles record ever made.]

This is what I initially said about the record:

This is a Minty Capitol Purple Label LP with THE BEST SOUND I have ever heard for a Capitol Beatles LP. If more of them sounded like this we wouldn’t have said all those mean and nasty things about Capitol Records for the past forty years. Yes, they still “butchered” For Sale to create this “album”, but that’s not the point. The point is this record sounds like a good Parlophone pressing — rich and sweet, with dead-on tonality. Whatever tapes Capitol may have used had plenty of that famous Beatles Analog Magic in them — you won’t hear any Beatles CDs sound like this, that I can assure you. That sound is gone and it ain’t comin’ back.

The late Capitol mastering here is Right On The Money. I don’t think they ever cut a record better. You can be sure the original Rainbow Label pressings sound as bad as you remember. I have never heard ANY original Capitol pressing that sounded like this — not even close.

The two singles mentioned below both have DREADFUL SOUND, the kind we have come to expect from Capitol. Everything else is wonderful.

“Dave Dexter, Jr. (a name which will live in infamy) “assisted” the Beatles by pulling eight tracks from Beatles for Sale, one from A Hard Day’s Night [I’ll Be Back], and both sides of the latest Beatles single (“I Feel Fine”/”She’s a Woman”) for the creation of this album.” – AMG