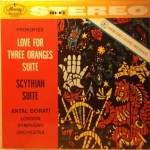 Huge hall space, wonderfully textured strings – it’s easy to forget just how REAL a recording like this from 1957 can sound.

With almost none of the Mercury nasality on the strings or the brass, we were knocked out by the sound and, of course, the legendary performance.

My notes for side one read:

If that sounds like the kind of record you would like to play for yourself, here it is.

The Scythian Suite was also very good but it seems to get a bit congested (tape overload? compressor overload?) on the loudest parts. It does sound amazing in the quieter passages. It’s not distorted, just brash. It’s very dynamic of course, as is side one. That’s Mercury’s sound.

This was obviously a record the previous owner did not care for. We acquired a copy of LSC 2449 in the same batch, but unfortunately that was a record the owner must have loved — it’s just plain worn out. (We kept it as a reference copy for a future shootout which, considering how rare the record is, may never come to pass.)

In the heyday of the ’90s, when these records were all the rage, this copy would have sold for at least $1000 and probably more. And the copy that sold for that would have been very unlikely to sound as good as this one, if only for the fact that cleaning technologies have advanced so much over the last ten years or so.

The libretto is based on the 18th-century commedia dell’arte theater piece L’amore delle tre melarance by Carlo Gozzi. The story is of a young, melancholy Prince who, upon laughing at the unfortunate antics of the old witch Fata Morgana, is cursed by her to voyage to distant lands in search of three rather large oranges, each of which contains a beautiful Princess. The first two Princesses die instantly on their emergence from the oranges; only the third and most beautiful, Princess Ninetta, survives her exposure to the elements. The Prince and Ninetta fall in love and marry, and Fata Morgana flies to the nether regions.

In the summer of 1914, Prokofiev, the then-emerging enfant terrible of Russian music, traveled to London to meet with the ballet impresario Sergei Diaghilev. Diaghilev commissioned the young composer to write a ballet with a prehistoric or fairy-tale scenario — hoping, perhaps, for the same kind of success he had recently enjoyed with the like-themed ballets of Stravinsky. Prokofiev returned to St. Petersburg and engaged the services of poet Sergei Gorodetzky in developing an effective story line.

The composer settled on a theme centered on a prehistoric tribe of barbarians, the Scythians, known to drink blood and engage in other similarly gruesome practices. The immediate musical result was Ala and Lolli (1914-1915), which Prokofiev first presented to Diaghilev in the form of a nearly complete piano score. Diaghilev, however, rejected the work as too close in spirit to Stravinsky’s Rite of Spring, fearing comparisons to the still-new succès du scandale. To placate Prokofiev, Diaghilev commissioned from the dejected composer a new ballet, Chout (1915). Before fulfulling that commission, though, Prokofiev turned his attention back to his orphaned ballet, distilling its most effective numbers into the Scythian Suite.

The suite is cast in four movements whose titles readily evoke the ballet’s prehistoric themes: “The Adoration of Veles and Ala,” “The Evil God and Dance of the Pagan Monster,” “Night,” and “The Glorious Departure of Lolli and the Sun’s Procession.” What is most immediately striking about the score is Prokofiev’s brilliant orchestration. The music is the product of a 23 year old, yet it clearly demonstrates the unmistakable confidence, control, and imagination of a seasoned master. The vivid colors and instrumental effects are such that the work, despite its relative unfamiliarity, survives as one of the most brilliant orchestral essays of its era.

The first movement begins savagely, the discordant main theme calling to mind a titanic struggle between monstrous forces. The mood turns quiet but restless, and the sound darkens; here the writing for reeds and harp here is especially brilliant and atmospheric. The second movement is fast and brutal, the rhythms pounding and insistent, the themes menacing and ominous; this is the most unambiguously Russian music of the suite. The first half of “Night” is appropriately dark, the second half explosive and unsettling. “The Glorious Departure” begins with a rush of energy, then slows to a colorful march, followed by a menacing yet comical theme. The suite concludes with a brilliant depiction of the rising sun that smites Chuzbog.

The Scythian Suite was premiered under the composer’s baton in St. Petersburg on January 29, 1916.

Suite from “The Love for Three Oranges”