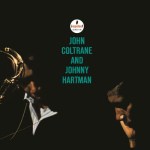 We were only slightly impressed with both the Speakers Corner pressing of this album and the earlier Impulse Heavy Vinyl edition from the ’90s. In our opinion neither one is worth pursuing.

This could very well be the greatest collaboration between a horn player and a singer in the history of music. I honestly cannot think of another to rank with it. Ella and Louis has the same feel — too giants who work together so sympathetically it’s close to magic, producing definitive performances of enduring standards that have not been equaled in the fifty plus years since they were recorded. And, on the better copies, or should we say the better sides of the better copies, RVG’s sound is stunning.

They Say It’s Wonderful: Hartman and Coltrane, an Appreciation

Over the past month or so, I have listened to John Coltrane and Johnny Hartman, one of the greatest jazz vocal albums ever made, about once a day. I haven’t tired of it, which is a testament to its durability. But I think there’s more to it than that. I discovered John Coltrane and Johnny Hartman about four years ago, and it continues to enchant me. The album—composed of six slow yet easily digestible romantic ballads—may contain the most beautiful half hour of music I have heard on one CD.

I’m not trying to idealize the record. But I’m not alone in feeling so strongly. Writing in Esquire magazine in 1990, Daniel Okrent named John Coltrane and Johnny Hartman the greatest record ever made. Okrent admitted such a claim “is a fragile limb on which to walk.” But he stood firm. “If you want to argue,” Okrent wrote, “forget it; having listened to John Coltrane and Johnny Hartman for some fifteen years, I simply can’t be moved.”

A few years ago, while doing research for a jazz history class at Rutgers University in Newark, the saxophonist Jeff Coffin told me that John Coltrane and Johnny Hartman was the first CD he bought.

“It really latches onto you,” Coffin said. “You crave it.”

I agree with Coffin but can’t go as far as Okrent, even though part of me wants to. Nancy Wilson/Cannonball Adderley, for instance, made in 1961, is an achingly lovely vocal album from which I’ve gotten a lot of the same pleasure. Still, throughout the years I’ve returned to John Coltrane and Johnny Hartman more than any other album I own. What accounts for its charm?

In March the album will turn fifty years old, so it feels like a good time to look back on it. The album was recorded at the behest of Bob Thiele, Coltrane’s producer at Impulse Records, who wanted Coltrane to make some more accessible music after a spate of bad reviews. Coltrane recorded some ballads, cut some tracks with Duke Ellington, and then chose Johnny Hartman—a ballad singer with an astonishingly deep baritone voice and perfect intonation—for a vocal album. He had never recorded with a singer before, and he never would again.

Coltrane explained to Frank Kofksy in 1966 why he wanted Hartman, of all singers, for the record: “And Johnny Hartman—a man that I’d had stuck up in my mind somewhere—I just felt something about him, you know, I don’t know what it was. And I liked his sound, I thought there was something there I had to hear, you know, so I looked him up and did that other one, see.”

Gregg Akkerman writes in The Last Balladeer: The Johnny Hartman Story that Coltrane and Hartman had never met before the recording, though they both played in Dizzy Gillespie’s orchestra in the 1940s at different times. Hartman was understandably reluctant to accept Coltrane’s invitation, given the saxophonist’s reputation for wildness. (A couple of years earlier, in 1961, John Tynan wrote in DownBeat magazine that Coltrane’s music with Eric Dolphy represented “anti-jazz.”) But Coltrane, who achieved God-like status before he died in 1967, was a sensitive accompanist and, as it turned out, a fine match for Hartman.

Of the many well-chosen tracks on John Coltrane and Johnny Hartman, I’m particularly fond of two of them: Irving Berlin’s “They Say It’s Wonderful” and “You Are Too Beautiful,” written by Rodgers and Hart. Depending on my mood, I might add “Lush Life,” Billy Strayhorn’s haunting composition, to that list. Hartman’s phrasing is immaculate on every number; he artfully inhabits each lyric. In “They Say It’s Wonderful,” Berlin rhymes the word “grand” with “and,” an awkward thing to do. As Alec Wilder writes in his definitive study, American Popular Song, “only a master lyricist would trust such a bland connective word to bear such weight,” and only a master vocalist could nail the connection like Hartman does.

What makes this record particularly fine is Coltrane’s fantastic rhythm section, with Elvin Jones on drums, Jimmy Garrison on bass, and McCoy Tyner—the only living musician from the session—on piano. In “You Are Too Beautiful,” Coltrane lays out, letting Tyner take a graceful solo in double time. Jones, who could play very loosely and with much power, uses brushes the entire album; he lays down remarkably delicate beats. Garrison plucks deep, round notes that mimic Hartman’s voice, which sounded like a cello at times.

The album has its faults, I’m reluctant to say. The last and weakest track, “Autumn Serenade,” a slightly up-tempo number with a rumba feel, seems out of place. (The other tracks include “Dedicated To You” and “My One And Only Love.”) With so many songs to choose from, I wonder why they used “Autumn Serenade.” Perhaps I’m alone here, but I wish the band had ended with another slow ballad. “Midnight Sun,” say. Or maybe “The Masquerade Is Over.” I can imagine a slowed down “There Will Never Be Another You” sounding particularly good. Nonetheless, Coltrane’s solo on “Autumn Serenade” is sublime; you get a mild, fleeting taste of the ferocious saxophonist he could be.

Which brings me to this: as much as I love John Coltrane and Johnny Hartman, it has never been my favorite Coltrane album. That designation goes to Crescent, a collection of deep and searching ballads recorded in 1964 with the same group from the Hartman date. In the 1960s, Coltrane was moving so quickly and making music so far out—see, for example, Interstellar Space, one of his last studio recordings—that John Coltrane and Johnny Hartman seems like a footnote, an afterthought, in his vast output. Perhaps that’s why, three years later, Coltrane felt he needed to tell Frank Kofsky that he didn’t regret making the record. Why would you regret making something so good?

As for Hartman, John Coltrane and Johnny Hartman is, I think, the best thing he ever did. I’m also fond of Songs from the Heart, Hartman’s first LP and one of the better records he made in his life. But the date with Coltrane is, without a doubt, the crown jewel of his discography. Hartman’s voice is arrestingly beautiful (praise Rudy Van Gelder’s excellent engineering), and he owns each song.

Because Johnny Hartman sang more like Bing Crosby than a blues shouter at a time when handsome black singers were not expected to do that, he never really got the recognition he deserved.

“I’ve seen times,” Hartman once said, tragically, “when I couldn’t go into white clubs and sing my style of singing … You get the feeling that you’re never supposed to be serious or be a man who could fall in love.”

Hartman enjoyed some popularity in the late forties and early fifties but for most of his life worked the supper club circuit in the shadow of fame. By the time he died of lung cancer in 1983, he was relatively obscure, though deeply respected by singers like Frank Sinatra and Tony Bennett. In 1995 Clint Eastwood featured Hartman’s deep voice in The Bridges of Madison County, giving him some posthumous recognition.

As far as I know, no one has used any of the music from John Coltrane and Johnny Hartman in a movie; I’m hoping someone will. In any case, after a month of hard listening, John Coltrane and Johnny Hartman has become my own kind of internal soundtrack. I whistle these ballads as I walk down the street, but mess up their difficult melodies. I try to sing them, but can’t really, not the way I’ve heard them. So I put on my headphones and play the record again and furrow my brow as I marvel at its mysterious beauty.