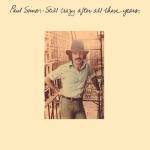 The immediacy of the vocals is striking, putting a living, breathing Paul Simon right between your speakers

An extremely tough album to find with the kind of big, spacious, Tubey Magical sound this pressing offers

Clean, clear and open are nice qualities to have, but the richer, smoother, more natural sounding copies are the ones that win our shootouts

4 1/2 stars: “…he was never more in tune with his audience: Still Crazy topped the charts, spawned four Top 40 hits, and won Grammys for Song of the Year and Best Vocal Performance.

Please note: we award the Four Plus A++++ grade so rarely that we don’t have a graphic for it in our system to use in the grading scale shown above. So the side one here shows up on the chart as A+++, but when you hear this copy you will know why we gave it a fourth plus!

The overall sound here is big and rich with lots of energy. You get texture to the instruments (check the strings in the title track) but a smooth quality to the vocals instead of the grit and strain you hear on most copies. There’s extension up top and weight down low.

This vintage Columbia pressing has the kind of Tubey Magical Midrange that modern records rarely even BEGIN to reproduce. Folks, that sound is gone and it sure isn’t showing signs of coming back. If you love hearing INTO a recording, actually being able to “see” the performers, and feeling as if you are sitting in the studio with Paul, this is the record for you. It’s what vintage all analog recordings are known for — this sound.

What the best sides of Still Crazy After All These Years have to offer is not hard to hear:

You can find this album in any store any day of the week, but let me tell you — most copies out there are godawful. I couldn’t stand to sit through another grainy, dry pressing of this album with a gun to my head — it doesn’t matter how good the music is.

On the best copies, however, it’s a whole different story.

What separates the mediocre-to-bad-sounding average copy from a Hot Stamper on side one is how well mastered and pressed (yes, pressed, because we shouldn’t overlook what bad vinyl can do to the sound) two songs are: Still Crazy After All These Years and 50 Ways to Leave Your Lover.

If you get those two tracks right — breathy vocals, sounding smooth and sweet, with the sibilance under control, supported by good solid bass — the whole side is going to be good, maybe even amazingly good.

On side two listen to Have a Good Time and You’re Kind. On the better Hot Stamper copies, both will sound wonderful.

Still Crazy After All These Years

The toughest test of them all. If this song sounds good, you are 90% of the way there.

This track was supposed to be a hit single and has the radio mix to prove it, and it WAS a hit, but it’s not exactly as pleasing to the audiophile ear as the other songs on the side.

This track often has some midrange hardness and more of a dry, transistory quality than others on side one — that is of course unless you happen to be playing an exceptionally good Hot Stamper copy. The better Hot Stampers also seem to have substantially more ambience. It’s really a quite well recorded song when good mastering lets you hear it right.

On most copies, in the louder parts of the chorus there is also something that sounds like compressor or limiter distortion on the voices. Turns out it’s actually a mastering or pressing issue; on the best copies the loudest vocal parts sound just fine.

How about that awesome Steve Gadd drum part? What pop song relies more on its beat than this one? It’s practically worth the price of the album to hear those drums sound so good.

One of the best sounding tracks on the album! Very open and sweet on the better copies.

Another top track. The vocals here are especially delicate and silky when you get a properly mastered and pressed copy.

The third new studio album of Paul Simon’s post-Simon & Garfunkel career was a musical and lyrical change of pace from his first two, Paul Simon and There Goes Rhymin’ Simon.

Where Simon had taken an eclectic approach before, delving into a variety of musical styles and recording all over the world, Still Crazy found him working for the most part with a group of jazz-pop New York session players, though he did do a couple of tracks (“My Little Town” and “Still Crazy After All These Years”) with the Muscle Shoals rhythm section that had appeared on Rhymin’ Simon and another (“Gone at Last”) returned to the gospel style of earlier songs like “Loves Me Like a Rock.” Of course, “My Little Town” also marked a return to working with Art Garfunkel, and another Top Ten entry for S&G. But the overall feel of Still Crazy was of a jazzy style subtly augmented with strings and horns. Perhaps more striking, however, was Simon’s lyrical approach…