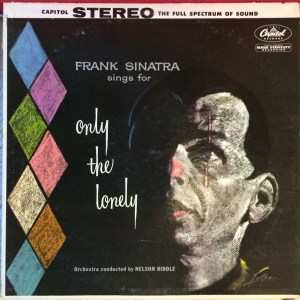 It is TOUGH to find a good sounding Only The Lonely, but this pressing really delivers. Frank’s vocals sound present, breathy, and full — just the way they need to.

According to John Rockwell’s book, Sinatra: An American Classic, when asked at a party in the mid-1970s if he had a favorite album among his recordings, without hesitation, Sinatra chose Only the Lonely.

Only the Lonely
Angel Eyes
What’s New?
Willow Weep for Me
Good-Bye

Originally, Frank Sinatra had planned to record Only the Lonely with Gordon Jenkins, who had arranged his previous all-ballads album, Where Are You. Jenkins was unavailable at the time of the sessions, which led Sinatra back to his original arranger at Capitol, Nelson Riddle. The result is arguably his greatest ballads album.

Only the Lonely follows the same formula as his previous down albums, but the tone is considerably bleaker and more desperate. Riddle used a larger orchestra for the album than he had in the past, which lent the album a stately, nearly classical atmosphere. At its core, however, the album is a set of brooding saloon songs, highlighted by two of Sinatra’s tour de forces — “Angel Eyes” and “One for My Baby.”

Sinatra never forces emotion out of the lyric, he lets everything flow naturally, with grace. It’s a heartbreaking record, the ideal late-night album. 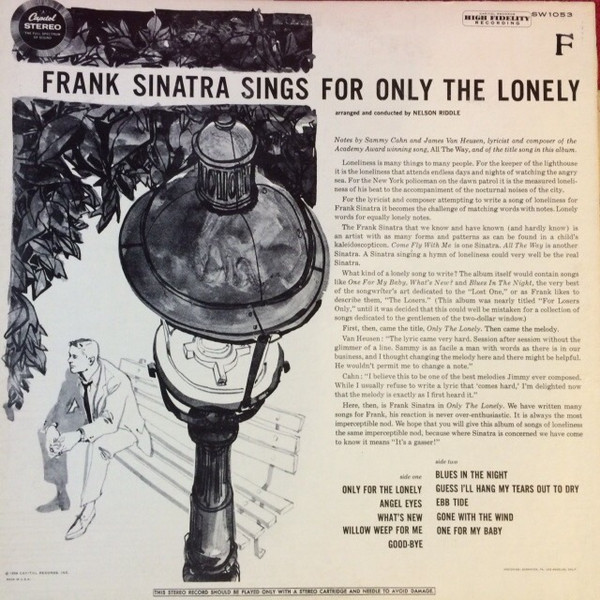