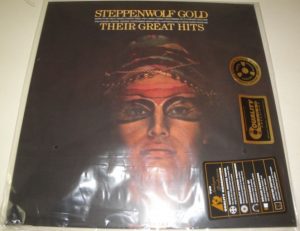 There is a story behind how I got my mitts of this particular Heavy Vinyl pressing.

Months ago a fellow contacted us to buy some of our Hot Stamper pressings.  We sent him one or two, and he soon wrote back to say he was not happy with the sound. We exchanged emails with him on a number of occasions, trying to rectify the situation and get him records he would be happy with.

In the middle of all this back and forth, a discussion we had crossed over into Heavy Vinyl territory, specifically were there any that he liked the sound of?  Why yes, there were.

You guessed it. The above-pictured album is one he recommended. (There was another he also said we should try, but after playing this one we decided against buying any more records he liked the sound of, as you will see.)

So, a number of months ago we finally got around to cracking the seal and playing our newly remastered Heavy Vinyl LP.

Right from the get-go, thick, murky, compressed, lifeless, ambience-free, dead-as-a-doornail sound started to come out of my speakers. Like sludge from a sewer you might say. What the hell was going on?

I quickly grabbed a Super Hot copy off the shelf and put it on the table.

Here was the energy, clarity, richness, space and more that had been missing mere moments before while playing the Heavy Vinyl pressing. Now, coming out my speakers was everything that makes a good vintage pressing such a joy to listen to. I felt like turning it up and rocking out. The first song is Born to Be Wild. Who doesn’t love to blast Born to Be Wild?

What a difference. Night and Day. Maybe more!

As I was thinking about the turgid, compressed, veiled, overly smooth but not tonally incorrect sound coming out of my speakers, I thought back about the kinds of stereo systems that can produce that sound on command. They often look like the one you see below. 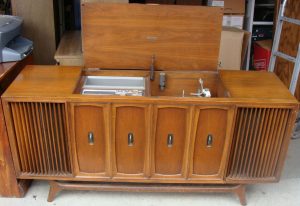 If this is your idea of good sound, you are in luck. You can buy your Limited Edition Heavy Vinyl audiophile pressings from Acoustic Sounds to your heart’s content.  They’re sure cheaper than our records, and they apparently do a bang up job of giving you precisely the sound you’re looking for on vinyl.

To finish up with our little story, to no one’s surprise we never could satisfy our new customer. We ended up refunding him all his money. It seems our records were expensive, and simply not much better than records he owned or could find cheaply enough.  Ours might be even worse! Who the hell do we think we are?  The nerve.

I also know he wasn’t playing them on an old console. He took great pains to tell me all about his fancy handmade tonearm, custom tube preamp and screen speakers. State of the Art stuff in his mind, no doubt about it.

But if your system is so ridiculously bad that an Analogue Productions Heavy Vinyl LP doesn’t call attention to its manifold shortcomings, doesn’t actually make your head hurt and your blood boil at the very idea that someone would charge money for such bad sound, you might want to think about scrapping your precious audiophile equipment and starting over.

Of course, this guy and the thousands of other audiophiles like him would never do such a thing. They are thoroughly invested in whatever approach to audio they have taken, and nobody can teach them anything.  They already know more than you.

They’re also the ones keeping hopelessly incompetent labels like Analogue Productions in business.  They supported Classic Records before it went under, they support Mobile Fidelity to this day. They are the guys that buy Heavy Vinyl records and extoll their virtues on audiophile forums far and wide.  Some even make youtube videos about this crap now and get tens of thousands of hits.

It’s sad, but there is nothing we can do but keep on doing what we are doing: finding good pressings for audiophiles who can appreciate the difference.

Another way we can help is this. Use the guide below when you do your shootouts for records, Heavy Vinyl and otherwise. Perhaps you will avoid the mistakes the above-mentioned gentleman made.  We include them in practically every listening of every record we sell.

And this blog is full of advice explaining practically everything there is to know about records.

You may want to start here.

The term heavy metal was rightfully named for this band. Steppenwolf fused traditional rock and R&B with late ’60s contemporary heaviness. “Born to Be Wild,” their signature tune, has aged amazingly well. Aside from the song’s power and performance, its engineering and production is stellar. This goes for most of Steppenwolf’s catalog as well. Other tracks of note include the lesser known “Rock Me, which was used in the film Candy. It’s an amazing period piece that reflects the underside of Hollywood life… as an introduction to a great band, [this album is] nearly perfect.