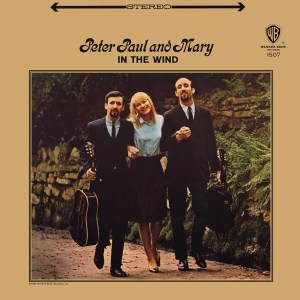 The sound is big, open, rich and full, with the performers front and center (as well as left and right). The highs are extended and silky sweet. The bass is tight and punchy. And this copy gives you more life and energy than others by a long shot. Very few folk records offer the kind of realistic, lifelike sound you get from this pressing, on both sides!

This original Gold Label stereo LP also has the MIDRANGE MAGIC that’s no doubt missing from whatever 180g reissue has been made from the 50+ year old tapes. As good as that pressing may be, we guarantee that this one is dramatically more REAL SOUNDING. It gives you the sense that Peter, Paul and Mary are right in the room with you.

Warners pressings are all over the map. When you find a good one, you can be pretty sure it’s the exception, not the rule. That’s been our experience anyway.

Currently, 99% (or more!) of the records we sell are cleaned, then auditioned under rigorously controlled conditions up against a number of other pressings, awarded sonic grades, and eventually condition checked for surface noise.

Stewball
All My Trials
Don’t Think Twice, It’s All Right
Freight Train
Quit Your Low Down Ways
Blowin’ in the Wind

Their third recording was one of the group’s stronger outings… In particular, this record was essential to boosting the profile of Bob Dylan, including their huge hit cover of “Blowin’ in the Wind,” their Top Ten version of “Don’t Think Twice, It’s All Right,” and the bluesy “Quit Your Lowdown Ways,” which Dylan himself would not release in the ’60s (although his version finally came out on The Bootleg Series). “Stewball,” “All My Trials,” and “Tell It on the Mountain” were other highlights of their early repertoire, and the dramatic, strident, but inspirational “Very Last Day” is one of the best original tunes the group ever did.

Snow was piled up the stairs an onto the street that first
winter when I laid around New York City
It was a different street then-
It was a different village-
Nobody had nothin-
There was nothin t get-
Instead a bein drawn for money you were drawn
for other people-
Everybody used t hang around a heat pipe poundin subterranean
coffee house called the Gaslight-
It was at that time buried beneath the middle a MacDougal Street-
It was a strange place an not out a any schoolbook-
More’n seven nites a week the cops and firemen’d storm down the
steps handin’ out summons for trumped up reasons-
More’n five nites a week out a town bullies’d start trouble an
everybody from John the owner t Dave the cook t Rod the cash
register ringer t Adele the waitress t anybody who was on the
stage t just plain friends who were hangin around would have
t come up swingin dishes an handles an brooms an chairs an
sometimes even swords ‘at hung on the wall in order t match
the bullies’ weight an the bullies was always big bullies-
Everybody that hung out at the Gaslight was close-
Yuh had t be-
In order t keep from going insane and in order t survive-
An it can’t be denied-
It was a hangout-
But not like the street corner-
Down there we weren’t standin lookin out at the world watchin
girls-and findin out how they walk-
We was lookin at each other … and findin out about ourselves-
It is ‘f these times that I remember most sadly-
For they’re gone-
An they’ll not never come again-
It is ‘f these times I think about now-
I think back t one a them nites when the doors was locked
an maybe thirty or forty people sat as close t the stage as
they could-
It was another nite past one o’clock an that meant that the
tourists on the street coundn’t get in-
At these hours there was no tellin what was bound t happen-
Never never could the greatest prophesizor ever guess it-
There was not such a thing as an audience-
There was not such a thing as performers-
Everybody did somethin-
An had something t say about somethin-
I remember Hugh who wore different kinda clothes then but
still shouted an tongue twisted flowin lines a poetry
that anybody who could be struck by the sounds ‘f a rock
hittin a brick wall could understand-
I remember Luke playin his banjo and singin “East Virginia”
with a tone as soft as the snow outside an “Mr. Garfield”
with a bitin touch as hard as the stovepipe on the inside-
An Dave singin “House a the Risin Sun” with his back leaned
against the bricks an words runnin out in a lonesome
hungry growlin whisper that any girl with her face hid in the
dark could understand-
Paul then was a guitar player singer comedian-
But not the funny ha ha kind-
His funnyness could only be defined an described by the word
“hip” or “hyp”-
A combination a Charlie Chaplin Jonathan Winters and Peter Lorre-
Maybe it was that nite that somebody flicked a piece a card-
board in fron a the tiny spotlight an he made quick jerky
movements on the stage and everybody’s eyes was seein first
hand a silent movie for real-
The bearded villan ‘f an out a print picture-
There aint room enuff on thepaper t tell about everybody
that was there an exactly what they did-
Every nite was a true high degree novel-
Anyway it was one a these nites when Paul said
“Yuh gotta now hear me an Peter an Mary sing”
Mary’s hair was down almost t her waist then-
An Peter’s beard was only about half grown-
An the Gaslight stage was smaller
An the song they sung was younger-
But the walls shook
An everybody smiled-
An everybody felt good-
An down there approval didn’t come with the clappin a hands
at the end ‘f the song-
It came burstin out anytime any way it felt like
burstin out-
An they were approved-
By the people watchin ‘m and by ‘mselves-
Which really was one-
An that’s where the beginnin was at-
Inside them walls ‘f a subterranean world-
But it’s a concrete kind a beginnin-
It’s concrete cause it’s close-
An that feelin aint t be forgotten-
Yuh carry it with yuh-
It’s a feelin that’s born an not bought
An it can’t be taught-
An by livin with it yuh learn t see and know it in other
people-
T sing an speak as one yuh gotta think as one-
An yuh gotta believe as one-
An yuh gotta feel as one-
An Peter an Paul and Mary’re now carryin the feelin
that was inside them walls up the steps t the whole
outside world-