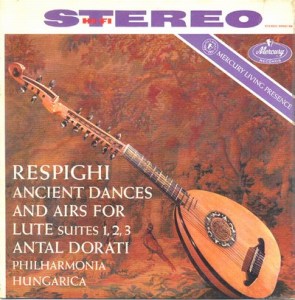 Both sides of this TAS List early Colorback RFR copy have SUPER Hot Stamper sound, so much richer and sweeter and less strident than the typical copy you might find. (I must admit the Mercury approach to sound has not worn as well as I might have hoped. When it comes to the Big Three from the Golden Age, these days we prefer London, followed by RCA, then Mercury.)

Of course the music is wonderful, with Respighi looking back and paying homage to the music and the musical structures of the past. This is no Pines of Rome. Please see the Ancient Airs and Dances tab above for more on the music.

A++ Superb Living Presence sound. Listen especially to how textured and natural he cellos sound, as well as the strings in general. Mercury rarely recorded strings properly but here they sound tonally correct, neither nasally nor strident.

A++, superb again. Watch out for the opening though — it’s full of compressor distortion. Once it passes the sound is lovely: rich and sweet, two words we do not often associate with Mercury. But we do here!

Inclusion on The TAS List doesn’t guarantee great sound, but Better Records does. If you don’t think a Hot Stamper pressing sounds as good as we’ve described, we’ll always happily take it back and refund your money. Good luck getting ol’ Harry to send you a check when the TAS-approved pressings you pick up don’t deliver. Ours are guaranteed to.

Hungary, October 1956. Russian tanks roll into Budapest and brutally crush a 10-day-old uprising. Thousands of Hungarians flee their homeland to refugee camps in Austria. Amongst them are 200 musicians, most without their instruments, but determined to form an orchestra. With the help of refugee charities, private benefactors and the leadership of Antal Dorati, the Philharmonia Hungarica was born.

Within a year they are making world-class recordings, and performing all over the world. The Respighi Ancient Airs and Dances for Lute was recorded in 1958, and is still regarded as one of their finest works.

Ottorino RespighiThis is music of the modern era, but owes much to the past. Ottorino Respighi was not only a composer but also a musicologist and antiquarian. These 3 suites, written between 1917 and 1932, are arrangements of music from the Renaissance. The original composers flourished between 1575 and 1625. Their names Molinaro, Galilei, Caroso, Besard, Gianoncelli and Roncalli roll off the tongue beautifully, but are by no means household names today. Respighi’s task was to capture the elegance, subtlety and brilliance of this very old music in a form pleasing to the modern palate. He was so successful that they are some of the most popular works of the 20th Century.

Suites 1 and 2 are for full orchestra, and suite 3 is for strings only. Listening to them there is the curious juxtaposition of ancient ideas and themes with modern orchestration. To bring this off successfully, they must be performed with understated poise, elegance and the occassional flash of fire. The Philharmonia do this to perfection. From the well-known boisterous Bergemasca , to the soothing and elegant Campanae Parisienses (and incidentally a wonderful piece, a true discovery), the performances are polished and convincing. Nothing less could be expected under Dorati.

You may think that a recording over 40 years old may be left by the wayside by modern recording techniques. Not so. In fact, this is a CD that proves that a good analogue recording can be as good as any modern digital.

The common practice at the time was to use multiple microphones placed throughout the orchestra, then re-mix and balance them before final recording. Mercury’s sound engineer Bob Fine developed a new recording technique that used one ultra-sensitive microphone placed strategically in front of the orchestra. There was no limiting, balancing, mixing or boosting of the sound before it reached the final tape.

The result was a recording that was “like being in the living presence of the orchestra” according to Howard Taubman, chief music critic of the New York Times. This became known as Mercury’s Living Presence series of recordings. It was revolutionary in its time, and has proved itself so to this day.

Wonderful rediscovered music, a definative performance with a rich history, as good a recording as you will find anywhere, and for a bargain price. Worthy of its 5 stars.