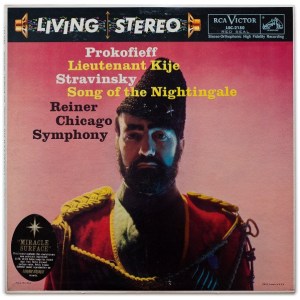 This Hot Stamper pressing has DEMONSTRATION QUALITY SOUND for the Stravinsky piece that takes up side two, the one on the TAS Super Disc List. The sound is BIG and BOLD, stretching from wall to wall, and so transparent you can clearly hear all the way to the back of the stage and then some. Trust me, few Shaded Dog pressings sound like this one!

Normally we list this record under Prokofiev, but, as usual, the Prokofiev side of this copy is not very good sounding. (In fact I’ve never liked the sound of Reiner’s Lt. Kije. It always sounded hard and sour like a bad DG to me.)

But the Stravinsky piece on this pressing is OUT OF THIS WORLD. It’s the best I’ve ever heard it. Although it is indeed true that this copy is the best one we’ve ever heard, we are still holding off giving it the full A+++ rating, for this reason: the stereo has come a long way since the last time we got a nice shaded dog pressing in, and we only have one, so who can say what kind of analog magic one might be able to find with five or ten other copies?

And it starts out a little weakly, with some smear to the brass and strings, but by about an inch in the problems go away and the sound becomes GLORIOUS — so dynamic and undistorted, with huge scale and real power. Plenty of top end too, something you rarely hear on vintage pressings like these. Which means this really is an exceptional copy!

Now as you know, it’s the Stravinsky piece that is TAS list. Many audiophiles have confused the Prokofieff music with that listing, mostly because they prefer the music of Prokofieff and they figure that if Harry Pearson likes the sound, it must be good. But I’m here to tell you that Reiner’s Lt. Kije NEVER sounds good. Passable maybe. Never good.

And you can prove that pretty easily by playing side one and then side two. One sounds so dramatically better than the other that there should be no doubt which one belongs on a list of Super Discs.

And based on what I’m hearing on this copy, I can’t argue with HP about the qualifications of this record as a true Super Disc. It deserves that ranking.

One of these days I’m going to make a list of all the records on the TAS list that don’t belong there. I’ve played far too many of them.

One of the pitfalls of producing such an anti-TAS list is the possibility that one might run into a Hot Stamper pressing of one of those so-called Super Discs that really DOES have super sound. We don’t know what copies HP was listening to. I’d love to do it anyway, but will probably never get around to it. Why waste time discussing bad records that Harry likes when there are so many good recordings that we like just sitting here waiting to go up on the site?

A similar pressing was returned by a customer about ten years ago who preferred the Classic Records version. I will state categorically, as clearly as I can: Classic has never, and probably will never, make a record that sounds this good.

The timbre of the instruments is as correct as one can imagine. All the textures of the orchestra are here and intact. There is certainly the possibility of compression in the loudest passages, which might not be true for the Classic Records version, but that is a very small price to pay for a recording that in all other respects is truly magical, and dramatically more enjoyable on almost every level.