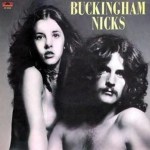 More of the Music of Lindsey Buckingham

More of the Music of Stevie Nicks

The biggest problem with this record is sound that gets too fat and too rich. There has to be transparency to the sound that lets us listen into the studio. When Stevie is singing, almost always double-tracked by the way, Lindsay is often doing harmony vocals well behind her, double-tracked as well.

You want to be able to hear PAST her all the way back to him and hear exactly what he’s doing. Most copies don’t let you do that.

The other problem is smeary guitar transients. The multi-tracked acoustic guitars tend to be rich and sweet on practically every copy you can find; this is not the problem. When they lack transient information, the right amount of “pluck”, they also tend to lack harmonic information, the overtones of the notes. Put those two together and you get a blobby mass of smeared guitars overlaid onto one another — not an irritating sound, but not an especially pleasing one either.

What we’re always trying to find in these shootouts are copies with the right BALANCE. When everything fits together nicely, when the mix sounds right and all the parts are working their magic separately and together, you know you are on the road to Hot Stamperville. You may not be hearing the best copy ever pressed, but you are undoubtedly hearing a copy that has The Kind of Sound You Want.

Those of you who read our commentary for Commoner’s Crown will recognize this bit, lifted practically whole from the listing. The British Sound? This record has it in spades:

The sound is rich and full in the best tradition of English Rock, with no trace of the transistory grain that domestic rock pressings so often suffer from. The bass is deep, punchy, full up in the mix and correct. There’s plenty of it too, so those of you with less than well controlled bass will have a tough time with this one.

But never fear; it’s a great record to tweak with and perfect for evaluating equipment.

Things have changed as we never tire of saying here at Better Records, but in a way you could say they have stayed the same. This used to be a demo disc, and now it’s REALLY a Demo Disc. You will have a very hard time finding a record with a punchier, richer, fuller, better-defined, dare I say “fatter” bottom end than the one found on both these sides.

Notice how there is nothing — not one instrument or voice — that has a trace of hi-if-ishness. No grain, no sizzle, no zippy top, no bloated bottom, nothing that reminds you of the phony sound you hear on audiophile records at every turn. Silky-sweet and tubey-magical, THIS IS THE SOUND WE LOVE.

We Love The Music Too Of Course

We really enjoy this album here at Better Records. It’s a wonderful preview of things to come for these two. Check out the early version of Crystal. On the best copies, it is warm, rich, and sweet — just like it is on the best copies of the Fleetwood Mac self-titled LP. In fact, many parts of this album bring to mind the best of ’70s Fleetwood Mac. Fans of the self-titled LP and Rumours are going to find A LOT to like here.