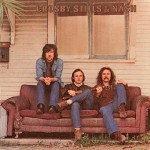 We wish that were not the case — we love the album — but the copies we know to have the potential for Hot Stamper sound are just not sitting around in the record bins these days.

Whatever you do, don’t waste your money on the Joe Gastwirt-mastered CD. It couldn’t be any more awful. (His Deja Vu is just as bad.)

What’s magical about Crosby, Stills, Nash & Young? Their voices of course. It’s not a trick question. They revolutionized rock music with their genius for harmony. Any good pressing must sound correct on their voices or it has no value whatsoever. A CSN record with bad midrange reproduction — like most of them — is a worthless record.

Listen to the section of the song that starts with Stills’ line “Can I tell it like it is”, with Nash and Crosby behind him — it’s clearly a generation of tape down from what came before and what comes after. The voices and the acoustic guitars just seem to lose their immediacy for no apparent reason. Wha’ happen?

It’s the mix, folks, and no mastering engineer can fix it. This album is full of parts and pieces of various songs that are occasionally problematical in that way. Recognize them for what they are, a little bump in the road of the recording, no more, no less. On the hot copies the best sounding material will sound amazing, and the lesser sounding material (i.e., the more poorly recorded or mixed bits and pieces) will sound as good as they can sound.

That’s the nature of the beast. It is what it is. The more intensely you listen to a record like this — a true Rock Classic from the ’60s — and we listen very intensely around here when doing these shootouts — the more you will notice these kinds of recording artifacts. It’s what gives them “character”.

It’s also what allows you to play a record like this on a regular basis and still find something new in it after all these years. We’ve made some recent improvements to the stereo and room here at Better Records and I can tell you I heard things in this recording I never knew were there. What could be more fun than that? The music never gets old, and neither does the sound!

The best copies have superb transparency, clarity and sweetness on this track, one of the most well-recorded on the entire album. Super-spacious tubey-magical DEMONSTRATION QUALITY sound is what this track delivers in spades.

You Don’t Have to Cry

This is by far our favorite test track for side two. The opening guitar strum should sound lively and tonally correct. If it sounds pinched, smeared, dull or lifeless, you are in big trouble on side two. Don’t feel bad; few copies you will ever play will get that guitar right. The ones we sell do, and I can tell you we have to work pretty darn hard to find them.

The best copies have tons of deep, hard-to-control deep bass on this track. Actually, there’s tons of deep bass on both sides of this album, one reason why it’s hard to find Hot Stampers. That kind of bass can easily get out of control if the record isn’t cut right and pressed right, and it sure seems like not many of them were.

The deep bass has to stay DOWN below the main elements in the mix. If it’s calling attention to itself by being overly loud or blubbery, or by sticking its head up into the midrange where it doesn’t belong, the balance suffers, and so does the listener. (The WORST example of bad blubbery Half-Speed Mastered bass has to be the Nautilus pressing of this album. Nice mids and highs but bass that will drive you from the room.

Lady of the Island

Like Guinnevere, the best copies have superb transparency, clarity and tubey-magical sweetness on this track. Another one of the most well-recorded on the entire album.

This is a wonderful song with lots of energy in the midrange and upper midrange area which is difficult to get right. A while back (2005) I was playing around with VTA, having recently installed a new cartridge on my playgrading table, when I discovered that this song showed me EXACTLY how to get the VTA right.

VTA is all about balance. The reason this song is so good for adjusting VTA is that the guitar at the opening is a little smooth and the harmony vocals that come in after the intro can be a little bright. Finding the balance between these two elements is key to getting the VTA adjusted properly.

Most people will never know what they’re missing on Helplessly Hoping because they will never have an amazing sounding copy of this song to play. The Hot Stampers are just too rare.