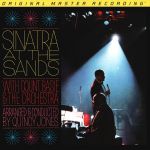 It’s pretty good. Compressed and veiled, but the tonality is correct. I give it a B. It will beat the vast majority of reissues, which tend to be thin, gritty, and woefully lacking in Tubey Magic. And the vinyl will be quiet, which is something not many of the best pressings can offer.

But who wants to listen to a B grade record when we you can buy A and A+ pressings from us?

What Hot Stampers of Sinatra At The Sands have to offer is not hard to hear:

Also, richness is very important. We look for a combination of rich, Tubey Magical sound that still maintains a fair amount of space, clarity, transparency and freedom from smear.

The pressings with the orange two-tone labels tend to be thinner and clearer. A high percentage of them are way too modern, bright and gritty, and we throw them right in the trade-in pile.

Finding the copy with “best of both worlds” sound is the trick. Pressings on both labels have won shootouts in the past. With this album we do what we always do. We play the record without looking at the label and simply grade the quality of the sound coming out of the speakers. Any other approach is liable to fall prey to unconscious biases. As we like to say, record shootouts may not be rocket science, but they’re a science of a kind, one with strict protocols developed over the course of many years to insure that the results we arrive at are as accurate as we can possibly make them.

I was at my local stereo store listening to speakers one day, and the salesman made a comment that the speakers we were listening to (the old Infinity Monitors with the Walsh tweeter) sounded “boxy”. I confessed to him that I didn’t actually know what that meant or what it would sound like if it weren’t boxy.