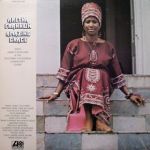 More of the Music of Aretha Franklin

Like most modern churches, the kind that have upholstered pews and lots of carpeting, the natural reverberation of the sound isn’t as pronounced as it would be were the recording taking place in a 16th century cathedral.

Note also that the recording is from 1972, not 1962, so the Tubey Magic that would have been on a recording such as this ten years earlier is not going to be as great. When we play a big stack of copies of a record like this, the limitations of the recording have to be taken into account. The best copies will do what the best copies do; we can’t ask them to sound like something they were never designed to sound like. The best copies of the album clearly sound quite a bit better than the average copy we played, but they still sound like the same recording, just bigger, richer, clearer and more alive.

To set your VTA right, don’t try to make Aretha too smooth — she should sound a bit “hot” when the spirit fills her and she shouts her loudest. If you get her to sound correct you lose a lot of space and ambience. What space and ambience there is on the tape need to be there for the recording to sound “real.”

Huge amounts of deep bass and bass in general are a hallmark of the recording.

The gospel singers behind the two leads should sound clean, clear and rich, never congested, throughout the recording on the best pressings. They too can help you get the VTA for this record dialed in right.

Balancing all the elements of this recording is not easy, but we think you will find that with a bit of work the results are more than worth it!