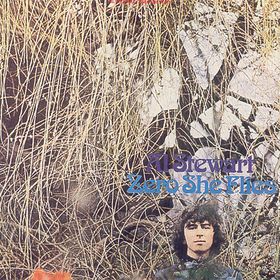 This is an AMAZINGLY RARE CBS Import LP.  We were pleasantly surprised when we flipped to side two and heard lots of tubey magic. The sound was rich and full with Al’s voice both present and natural.

It’s very unlikely that I will find another copy anytime soon and who knows if it would sound as good as this one does anyway. It’s certainly not likely to be in this kind of IMMACULATE condition either. Side two is where the real Hot Stamper action is on this record. If it were part of a Hot Stamper shootout we guess that side two would rate about A++.

The best cut is “Electric Los Angeles Sunset,” which puts Stewart’s eye for locale-based storytelling to more forceful use than it had ever been previously heard, detailing the grim side of the city rather than its glamorous one. “Manuscript” was also an important work in its focus upon past history and its effects on various characters, an approach that would within a few years become prevalent in Stewart’s work. Trevor Lucas and Gerry Conway of Fotheringay were among the backup players.