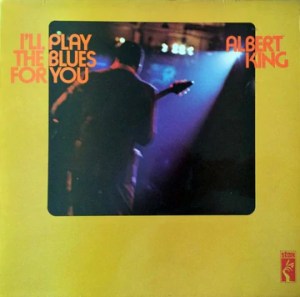 This vintage Stax Yellow Label pressing has the kind of Tubey Magical Midrange that modern records cannot even begin to reproduce. Folks, that sound is gone and it sure isn’t showing signs of coming back. If you love hearing into a recording, actually being able to “see” the performers, and feeling as if you are sitting in the control room hearing the master tape being played back, or, better yet, the direct feed from the studio, this is the record for you. It’s what Golden Age Blues Recordings are known for — this sound.

What the best sides of this Electric Blues (with Memphis Horns!) album have to offer is not hard to hear:

It’s not as if Albert King hadn’t tasted success in his first decade and a half as a performer, but his late-’60s/early-’70s recordings for Stax did win him a substantially larger audience. During those years, the label began earning significant clout amongst rock fans through events like Otis Redding’s appearance at the Monterey International Pop Festival and a seemingly endless string of classic singles. When King signed to the label in 1966, he was immediately paired with the Stax session team Booker T. & the MG’s.

Though 1972’s I’ll Play the Blues for You followed a slightly different formula, the combination of King, members of the legendary Bar-Kays, the Isaac Hayes Movement, and the sparkling Memphis Horns was hardly a risky endeavor. The result was a trim, funk-infused blues sound that provided ample space for King’s oft-imitated guitar playing. King has always been more impressive as a soloist than a singer, and some of his vocal performances on I’ll Play the Blues for You lack the intensity one might hope for. As usual, he more than compensates with a series of exquisite six-string workouts.