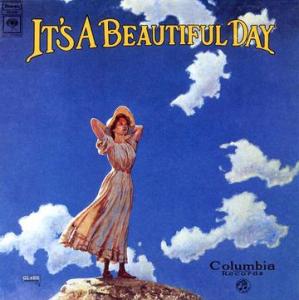 This vintage Columbia 360 label pressing has the kind of Tubey Magical Midrange that modern records can barely BEGIN to reproduce. Folks, that sound is gone and it sure isn’t showing signs of coming back. If you love hearing INTO a recording, actually being able to “see” the performers, and feeling as if you are sitting in the studio with the band, this is the record for you. It’s what vintage all analog recordings are known for — this sound.

This isn’t an album most people are familiar with, which is a shame because the music is WONDERFUL. Unlike some of their contemporaries, this band had excellent songwriting and arranging skills. This album is good from first track to last, with plenty of time set aside for those “progressive” excursions that make this such a ’60s Psych Classic.

And a mostly undiscovered audio gem too. The sound is wonderfully spacious and Three Dimensional, with tight bass and real dynamics. Of special interest to audiophiles is the vocal reproduction. La Flamme sings lead with a female doing high harmony, and the best way to describe this sound is MAGICAL.

Add to this lovely sound the added benefit of having a violin as the lead instrument and you have a record unlike any other in your collection. Take the intro to White Bird as just one example: the plucking strings you hear at the opening are not those of an acoustic guitar, but rather the pizzicato playing of a violin. These unique sonic qualities can be found everywhere on the album, making it a real treat for audiophiles and music lovers alike.

What We’re Listening For on It’s A Beautiful Day

Although they are not one of the better-known San Francisco bands to have emerged from the ballroom circuit of the late ’60s and early ’70s, It’s a Beautiful Day were no less memorable for their unique progressive rock style that contrasted well with the Bay Area psychedelic scene. Led by David LaFlamme (flute/violin/vocals) and his wife, Linda LaFlamme (keyboards), the six-piece unit on this album vacillates between light and ethereal pieces such as the lead-off cut, “White Bird,” to the heavier, prog rock-influenced “Bombay Calling.” One of the most distinct characteristics of It’s a Beautiful Day is their instrumentation. The prominence of David LaFlamme — former violin soloist with the Utah Symphony and original member of Dan Hicks & His Hot Licks — adds a refinement to It’s a Beautiful Day’s sound.

Likewise, the intricate melodies — mostly composed by the LaFlammes — are structured around the band’s immense virtuosity, a prime example being the exquisitely haunting harpsichord-driven “Girl With No Eyes.” The noir framework, as well as lyrics such as “…she’s just a reflection of all of the time I’ve been high,” point rather candidly to the hallucinogenic nature of the song’s — if not the band’s — influences. The same can be said of the languidly eerie “Bulgaria.” The almost chant-like quality of the track slowly crescendos into an hypnotic and dreamlike sonic journey — led by LaFlamme’s brilliant violin work. By virtue of being a Bay Area fixture in the late ’60s, It’s a Beautiful Day could also easily double as a hippie dance band — which they can also execute with great aplomb — as the wildly up-tempo “Time Is” amply proves. It’s a Beautiful Day remains as a timepiece and evidence of how sophisticated rock & roll had become in the fertile environs of the San Francisco music scene.