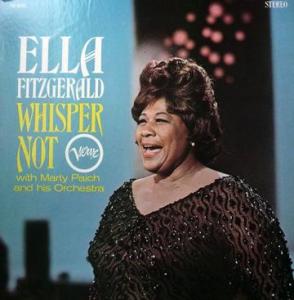 This vintage Verve stereo LP has the kind of Tubey Magical Midrange that modern pressings barely BEGIN to reproduce. Folks, that sound is gone and it sure isn’t showing any sign of coming back.

The key to any Ella recording on Verve is to find the pressing with the most presence, breathiness, richness, tubiness and all the other good stuff that vintage analog records can give you, whilst minimizing the midrangy EQ that is found on many of her albums.

And it can be done. This copy is proof! Hardness and honkiness are no strangers to her records, but the best pressings make the EQ on her vocals sound maybe not perfect, but right for the music.

What We’re Listening For on Whisper Not

A couple of high points: Spring Can Really Hang You Up The Most, the song Ella sang on her masterpiece, Clap Hands, is here rearranged for the players at hand, and the interpretation is fresh and moving. The song I Said No is filled with silly double entendres and is a hoot.

But I have to say those are two high points picked almost at random. Every track on this album is wonderful. I think this is one of her three or four best recordings ever. Another would be the Johnny Mercer songbook album.

Anyway, take it from an Ella fan, you can’t go wrong with this one. You could demonstrate your stereo with a record this good. But what you would really be demonstrating is music that the listener probably hasn’t heard, and that’s the best reason to demonstrate a stereo!

On the cover of this record Ella looks a little frumpy; I was afraid this album was going to be frumpy too. I’m glad to say that the opposite is true. This album swings with the best she’s ever recorded. A lot of the credit must go to Marty Paich, one of my all-time favorite arrangers. I have been a big fan of his work ever since I first heard what he did for Art Pepper on his Modern Jazz Classics record on Contemporary from way back in 1959. The arrangements on Whisper Not just solidify my love for the guy.

One of my favorite tracks on the album. Ella’s version here is definitive. This track alone is worth the price of the album.

Spring Can Really Hang You up the Most

Arranged for big band, this interpretation is every bit as emotionally satisfying as the brilliant version Ella does on Clap Hands.

Old MacDonald Had a Farm

Whoever decided to put pianist Marty Paich and Ella Fitzgerald together in the studio in 1966 deserves a bit of credit for the great music on Whisper Not. Together, Fitzgerald and Paich deliver a dozen beautifully sung, carefully arranged standards. An orchestra tastefully backs Fitzgerald’s vocals, offering cushy support without overdoing it.

Even lighter pieces like “Sweet Georgia Brown” and “Old MacDonald” are given stately renditions. There’s a fun version of “I Said No,” filled with silly double entendres, and a relaxed take on “Thanks for the Memory.”

Norman Granz takes full advantage of stereo capabilities, creatively mixing the instruments to the right and left tracks while leaving Fitzgerald’s voice front and center. Paich adds to the overall sound quality by varying the arrangements from song to song, carefully wrapping each tune in the right package. These fine-tuned arrangements also provide the perfect launching pad for Fitzgerald to place her own stamp on material associated with other singers.

While both “Lover Man (Oh Where Can You Be)” and “You’ve Changed” will be recognized as Billie Holiday classics, Fitzgerald delivers light, elegant versions that are distinctly her own. Whisper Not captures two intelligent artists working toward a common goal and creating beautiful music in the process.