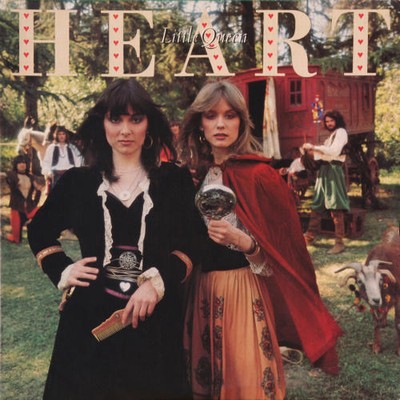 More of the Music of Heart

More of the Music of Women Who Rock

The beginning section is chock full of lovely and quite subtle details (such as the autoharp and tabla) that seem to lose their magic on most systems. The autoharp is rich and chimey, and the tabla has some real low end extension. The recorders and flutes that join them are breathy and sweet, while the acoustic guitars heard throughout display all the tubey-magical harmonic richness found on our favorite Hot Stamper recordings, from the Eagles first album to Teaser and the Firecat. These qualities easily get lost in the sauce if you’re listening to the average copy, or the typical audiophile stereo. That’s Part One of the test — the opening.

Part Two — For Those Who Are About to Rock

Now listen to the intensity of the toms as they break into the rock section. The sound is ENORMOUS and POWERFUL. I hope your woofers are in shape cause they’re about to get the workout of their lives. The Whomp Factor on the best copies is OUT OF THIS WORLD.

That’s what makes this such a great Test Disc. You can’t listen for just detail on a song like this. For Part One, yes, detail is good. For Part Two, detail is almost (but not quite) irrelevant. You need weight, fullness, richness, freedom from distortion, dynamics, power, slam — all the stuff that comes under the heading of Whomp Factor.

This is a true Demo Disc in the world of rock records. It’s also one of those recordings that demands to be played LOUD. If you’ve got the big room, big speakers, and the power to drive them, you can have a LIVE ROCK AND ROLL CONCERT in your very own house. When the boys behind Heart (superb musicians all) let loose with some of those Zep-like monster power chords — which incidentally do get good and loud in the mix, unlike most rock records which suffer from compression and “safe” mixes — I like to say that there is no stereo system on the planet that can play loud enough for me. (Horns maybe, but I don’t like the sound of horns, so there you go.)

I know you’ve heard me say this before, but I need to make something clear about this music. It doesn’t even make sense at moderate listening levels. Normal listening levels suck all the life right out of it. You can tell by the way it was recorded; this music is designed to be played back at LOUD levels, and anything less does a disservice to the musicians, not to mention you, the listener.

Small speakers and screens, both of which have difficulty moving large amounts of air, make a real mess of this album and others like them. We love big dynamic speakers because they make records like Abraxas and Little Queen and hundreds more come alive like you would not believe. Having big speakers and these kinds of very special pressings is a THRILL. We mentioned as much in our recent commentary for Revolver:

Little Queen — and especially the song Love Alive — tests it ALL. If you make any changes to your stereo, you can see if both sections of the song get better, each in their own very different ways.

Keep in mind that the amount of whomp in a system is generally limited by the size and number of dynamic drivers, as well as the size and shape of the listening room. Large dynamic speakers with multiple large woofers (12 inches and up, say) usually are capable of delivering serious amounts of whomp. Dynamic speakers with small woofers, as well as planars, even those with subs, have little to no whomp.