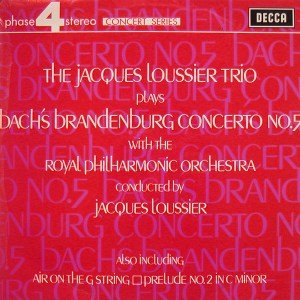 This London Phase 4 Original British pressing has the kind of Tubey Magical Midrange that modern records rarely even BEGIN to reproduce. Folks, that sound is gone and it sure isn’t showing signs of coming back. If you love hearing INTO a recording, actually being able to “see” the performers, and feeling as if you are sitting in the studio with The Jacques Loussier Trio and the Royal Philharmonic Orchestra, this is the record for you. It’s what vintage all analog recordings are known for — this sound.

What the best sides of Bach’s Brandenburg Concerto No. 5 from 1969 have to offer is not hard to hear:

What We’re Listening For on Bach’s Brandenburg Concerto No. 5

Brandenburg Concerto No. 5 in D Major

Air On The G String
Prelude No. 2 in C Minor

Jacques Loussier (26 October 1934 – 5 March 2019) was a French pianist and composer well known for his jazz interpretations, arranged for trio, of many of the works of Johann Sebastian Bach, such as the Goldberg Variations. The Jacques Loussier Trio, founded in 1959, played more than 3,000 concerts and sold more than 7 million recordings—mostly in the Bach series. Loussier composed film scores and a number of classical pieces, including a Mass, a ballet, and violin concertos. Loussier’s style is described as third stream, a synthesis of jazz and classical music, with an emphasis on improvisation.

Loussier began composing music while studying at the Conservatoire National Musique, having moved by then to Paris, with Nat, from the age of 16. At a competition at the conservatory, he played a prelude by Bach, and when his memory failed, improvised. He later said that he only followed a tradition, because musicians of the 18th century were great improvisers, Bach among them.

Loussier played jazz in Paris bars to finance his studies. Fusing Bach and jazz was unique at the time. After six years of studies, Loussier traveled to the Middle East and Latin America, where he was inspired by different sounds. He stayed in Cuba for a year.

Early in his career, Loussier was an accompanist for the singers Frank Alamo, Charles Aznavour, Léo Ferré and Catherine Sauvage.[7] In 1959, he formed the Jacques Loussier Trio with string bass player Pierre Michelot—who had played with Django Reinhardt and the Quintette du Hot Club de France—and percussionist Christian Garros. They used Bach’s compositions as a base for jazz improvisation and made many live appearances, tours, and concerts, as well as a number of recordings.

The trio began with Decca Records but changed to Philips/Phonogram in 1973. They sold over six million albums in 15 years. Their best known recording is “Air on the G String”, which was used to advertise the Hamlet brand of cigar in the UK for over 30 years. The trio played more than 3,000 concerts.

In the mid 1970s, the trio was dissolved. Loussier set up his own recording studio, Studio Miraval, which opened in 1977, where he worked on compositions for acoustic and electric instruments. He recorded with musicians such as Pink Floyd, Elton John, Sting, Chris Rea, and Sade. Parts of Pink Floyd’s album The Wall were recorded at his studio.

In 1985, the tricentenary of Bach’s birth, Loussier revived the trio with the percussionist André Arpino and the bassist Vincent Charbonnier. The bassist Benoit Dunoyer de Segonzac has also performed in the trio, replacing Charbonnier—whose left hand was affected by a stroke, resulting in his being unable to continue to play the bass—on a number of albums and concerts from at least as early as 1998 (on the album Satie: Gymnopédies Gnossiennes). Besides Bach, the trio recorded interpretations of compositions by Handel, Scarlatti, Vivaldi, Mozart, Beethoven, Chopin, Satie, Debussy, Ravel, and Schumann. A 2005 recording titled Take Bach, made by the trio along with the Pekinel sisters, features adaptations of Bach’s concertos for two and three pianos. Loussier’s last albums, My Personal Favorites and Beyond Bach, Other Composers I Adore, were released in 2014, on the occasion of his 80th birthday.