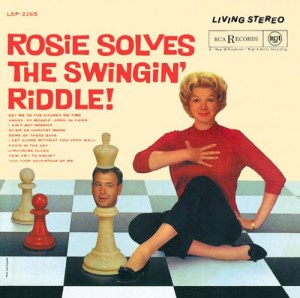 This Living Stereo pressing has the kind of Tubey Magical Midrange that modern pressings barely BEGIN to reproduce. Folks, that sound is gone and it sure isn’t showing any sign of coming back.

Having done this for so long, we understand and appreciate that rich, full, solid, Tubey Magical sound is key to the presentation of this primarily vocal music. We rate these qualities higher than others we might be listening for (e.g., bass definition, soundstage, depth, etc.). The music is not so much about the details in the recording, but rather in trying to recreate a solid, palpable, real Rosemary Clooney singing live in your listening room. The best copies have an uncanny way of doing just that.

If you exclusively play modern repressings of older recordings (this one is now 58 years old!), I can say without fear of contradiction that you have never heard this kind of sound on vinyl. Old records have it — not often, and certainly not always — but less than one out of 100 new records do, if our experience with the hundreds we’ve played can serve as a guide.

What We Listen For on Rosie Solves The Swingin’ Riddle

Get Me To The Church On Time
Angry
I Get Along Without You Very Well
How Am I To Know?
You Took Advantage Of Me
April In Paris

Although Rosemary Clooney worked with Nelson Riddle nearly every week for her ’50s radio show, they were together for full LPs much less often — only this record from 1961 and a 1963 follow-up titled Love. The pair made the most of their first collaboration, devising a program of 12 standards that combined Riddle’s pugnacious yet intricate arrangements with Clooney’s warm, grand vocals to create a swing record with feeling. Riddle’s orchestra roars through his breakneck arrangements for “April in Paris” and “Cabin in the Sky,” but Clooney weathers the storm with an elegance that borders on the untroubled. Vocalist fits together with orchestra like hand in glove, since nearly all of the musicians were veterans of her show. [A Bluebird reissue from 2004 added two bonus tracks, “Without Love” and “The Wonderful Season of Love” (the latter was the theme from Return to Peyton Place, directed by her husband, José Ferrer).