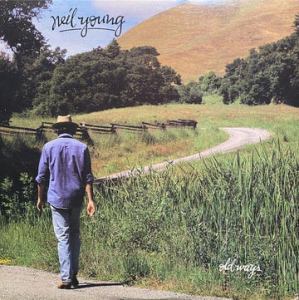 Copies with rich lower mids and nice extension up top (to keep the string arrangements from becoming shrill) did the best in our shootout, assuming they weren’t too veiled or smeary, of course.

For our shootout for Old Ways we had at our disposal a variety of pressings that had the potential for Hot Stamper sound. We cleaned them carefully, then unplugged everything in the house we could, warmed up the system, Talisman’d it, found the right VTA for our Triplanar arm (by ear of course) and proceeded to spend the next hour or so playing copy after copy on side one, after which we repeated the process for side two.

What We’re Listening For on Old Ways

… as well as too many string players and other singers to list.

The Wayward Wind
Get Back to the Country
Are There Any More Real Cowboys?
Once an Angel
Misfits

California Sunset
Old Ways
My Boy
Bound for Glory
Where Is the Highway Tonight?

In 1984, Geffen Records sued Neil Young on the grounds that he had submitted uncharacteristic, uncommercial records to the label. By the time a settlement had been reached, Young had been on the road with a country band called the International Harvesters for over a year and recorded a revamped version of Old Ways, a 1982 recording originally rejected by Geffen that was cut in the style of Harvest and Comes a Time, but with a stronger country leaning. Young depends heavily on friends, especially for vocals — Waylon Jennings sings harmony on six out of the ten tracks, and one of the others is a duet with Willie Nelson.

Though populated by cowboys and country references, Young’s take on the genre is typically idiosyncratic, including a reworked version of his autobiography in “Get Back to the Country,” a cover of the 1956 Gogi Grant hit “The Wayward Wind,” and the uncategorizable “Misfits,” which portrays astronauts watching Muhammad Ali fights on
television in space.